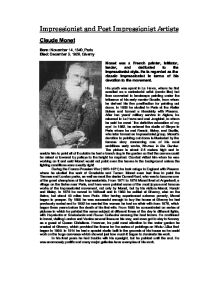 Impressionist and Post Impressionist Artists Claude Monet Born: November 14, 1840, Paris Died: December 5, 1926, Giverny Monet was a French painter, initiator, leader, and dedicated to the Impressionist style. He is regarded as the classic Impressionist in terms of his devotion to the movement. His youth was spent in Le Havre, where he first excelled as a caricaturist artist (comic like) but then converted to landscape painting under the influence of his early mentor Boudin, from whom he derived his firm predilection for painting out doors. In 1859 he studied in Paris at the Atelier Suisse and formed a friendship with Pissarro. After two years' military service in Algiers, he returned to Le Havre and met Jongkind, to whom he said he owed `the definitive education of my eye'. In 1862, he entered the studio of Gleyre in Paris where he met Renoir, Sisley, and Bazille, who later formed an Impressionist group. Monet's devotion to painting out doors is illustrated by the famous story concerning one of his most ambitious early works, Women in the Garden. The picture is about 2.5 meters high and to enable him to paint all of it outside he had a trench dug in the garden so that the canvas could be raised or lowered by pulleys to the height he required. Courbet visited him when he was working on it and said Monet would not paint even the leaves in the background unless the lighting conditions were exactly right! During the Franco-Prussian War (1870-1871) he took refuge in England with Pissarro where he studied the work of Constable and Turner. Monet even had time to paint the Thames and London parks, as well as meet the dealer Durand-Ruel, who was to become one of the great champions of the Impressionists. ...read more.

on canvas exactly what his eye saw in nature and for the qualities of pictorial form that he achieved through a unique treatment of space, mass, and color. C�zanne was modern compared to steroetypical impressionists, but he went beyond their interests in the individual brushstroke and the fall of light onto objects, to create, in his words, "something more solid and durable, like the art of the museums." C�zanne was went to school in Aix, where he had a close friendship with the novelist Emile Zola. He also studied law there from 1859 to 1861, but at the same time he continued attending drawing classes. Against the the will of his father, he made up his mind that he wanted to paint and in 1861 joined Zola in Paris. His father's reluctant consent at that time brought him financial support and, later, a large inheritance on which he could live without difficulty. In Paris he met Camille Pissarro and came to know others of the impressionist group. C�zanne, however, remained an outsider to their circle; from 1864 to 1869 he submitted his work to the official SALON and saw it consistently rejected. His paintings of 1865-70 form what is usually called his early "romantic" period. Extremely personal in character, it deals with bizarre subjects of violence and fantasy in harsh, somber colors and extremely heavy paintwork. Thereafter, as C�zanne rejected that kind of approach and worked his way out of the obsessions underlying it, his art is easily divided into three phases. In the early 1870s, dueto his association with Pissarro, with whom he painted outside Paris at Auvers, he incorperated the principles of color and lighting of Impressionism and loosened up his brushwork. ...read more.

Gauguin's new style was characterized by the use of large flat areas of nonnaturalistic color, as in Yellow Christ (1889, Albright-Knox Gallery, Buffalo, New York). In 1891, ruined and in debt, Gauguin sailed for the South Seas to escape European civilization and "everything that is artificial and conventional." Except for one visit to France from 1893 to 1895, he remained in the Tropics for the rest of his life, first in Tahiti and later in the Marquesas Islands. The essential characteristics of his style changed little in the South Seas; he retained the qualities of expressive color, denial of perspective, and thick, flat forms. Under the influence of the tropical setting and Polynesian culture, however, Gauguin's paintings became more powerful, while the subject matter became more distinctive, the scale larger, and the compositions more simplified. His subjects ranged from scenes of ordinary life, such as Tahitian Women on the Beach (1891, Mus�e d'Orsay, Paris), to brooding scenes of superstitious dread, such as Spirit of the Deadwatching (1892, Albright-Knox Art Gallery). His masterpiece was the monumental allegory Where Do We Come From? What Are We? Where Are We Going? (1897, Museum of Fine Arts, Boston), which he painted shortly before his failed suicide attempt. A modest stipend from a Parisian art dealer sustained him until his death at Atuana in Marquesas on May 9, 1903. Paul Signac Born: Died: Paul Signac was the theoretician of the Neo-Impressionist group and the only one of the group to create and important body of graphic work based on those principles. The work we are including in our show is not particularly dependent upon his theories, which advocated moving away from Seurat's scientific precision towards a freer, more spontaneous use of color. The Oxford Dictionary of Twentieth-Century Art notes that Signac spent a great deal of time on the Mediterranean and French Atlantic coasts. His work had a great influence on Matisse. ...read more.