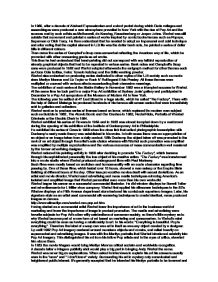 In 1960, after a decade of Abstract Expressionism and a short period during which Dada collages and assemblages were produced a new atmosphere prevailed in New York with the rise of Pop Art and the success met by such artists as Motherwell

In 1960, after a decade of Abstract Expressionism and a short period during which Dada collages and assemblages were produced a new atmosphere prevailed in New York with the rise of Pop Art and the success met by such artists as Motherwell, de Kooning, Rauschenberg or Jasper Johns. Warhol was still outside that movement and painted a series of works inspired by comic books heroes such as Popeye, Superman or Dick Tracy. He then understood that he needed to adopt an impersonal and cold technique and after noting that the capital element in U.S life was the dollar bank note, he painted a series of dollar bills in different colours. Then came the series of Campbell's Soup cans somewhat reflecting the American way of life, which he promoted with other consuming goods as art works. This time he had understood that hand-painting did not correspond with any faithful reproduction of already graphical objects that had to be repeated in various series. Bank notes and Campbell's Soup cans were produced in 1962 and Warhol adopted afterwards the serigraph method for other themes such as Coca Cola bottles, Heinz Tomato ketchup and the Brillo washing powder. Warhol also embarked on producing series dedicated to other myths of the U.S society such as movie stars Marilyn Monroe and Liz Taylor or Rock N' Roll legend Elvis Presley. ...read more.

One of these films, which lasted over 10 hours, showed a man asleep or the Empire State Building at different hours of the day. Other less provocative movies dealt with sexual deviations. As an artist and movie director, Warhol used advertising and mass media techniques mirroring America's isolated and amplified image that Warhol personified even more than his own works did. Warhol began his career as a successful commercial illustrator. He did window displays for Bonwit Teller and advertisements for I. Miller shoe company. Warhol first applied his silkscreen techniques in the 50's. Window displays of a Fifth Avenue department store featured his comicbook superhero images. Later, his signature style as an artist used commercial silk-screening techniques to create identical, mass produced images on canvas. http://www.allmarilyn.com/warhol-mm-pop-art.htm Having started as a commercial artist Warhol knew the importance of art in the business world of marketing and knew the importance of image in product promotion. The media and advertising were favorite subjects for Pop Art's often witty celebrations of consumer society, so there's little mystery as to why Warhol became part of a new form of art based on marketing and consumerism. In Warhol's mind everything could be seen as having a relationship to art. In his words: "Everything is beautiful. ...read more.

In the process Marilyn's youthful beauty as the quintessential Hollywood star is contrasted with the garish synthetic colors that suggest the artificiality of Tinseltown and the packaging of celebrity. Orange Marilyn (one of the first in the Marilyn series) sold in 1998 for over $17 million. A sum which solidifies Warhol's title of a Pop Art master and places him as the third most expensive contemporary artist, behind De Kooning and Johns. To put this price in art world perspective, $17 million is close to the $20 million price commanded by master works from the Impressionists. Warhol's other Marilyn portraits continue to increase in value and sell at auctions for millions of dollars. It could be said that Warhol had the spirit of an artist and the brain of a business man. He understood the art of marketing and in a sense was able to package and market himself as a celebrity and his work as fine art. By the time of his death in 1987 he had achieved celebrity status. Like Marilyn he achieved the level of a cult figure, unlike Marilyn he died a multi-millionaire. Warhol's stature as an artist can not be argued, but part of the success of the Marilyn portraits can only be explained by Marilyn Monroe's mythical aura and her place as a leading Pop culture icon. ...read more.