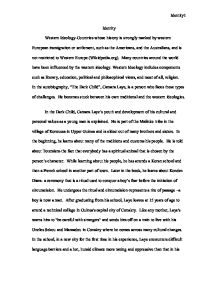 In the Dark Child, Camara Layes youth and development of his cultural and personal values as a young man is explained. Discuss.

Identity Western Ideology-Countries whose history is strongly marked by western European immigration or settlement, such as the Americans, and the Australians, and is not restricted to Western Europe (Wikidpedia.org). Many countries around the world have been influenced by the western ideology. Western Ideology includes components such as literary, education, political and philosophical views, and most of all, religion. In the autobiography, "The Dark Child", Camara Laye, is a person who faces these types of challenges. He becomes stuck between his own traditional and the western ideologies. In the Dark Child, Camara Laye's youth and development of his cultural and personal values as a young man is explained. He is part of the Malinke tribe in the village of Koroussa in Upper Guinea and is eldest out of many brothers and sisters. In the beginning, he learns about many of the traditions and customs his people. He is told about Totemism-the fact that everybody has a spiritual animal that is chosen by the person's character. ...read more.

Laye lives the life of a typical college school student, studying at the school's campus and returning home to Koroussa during the holidays. When he returns, he sees the transformation within his family and friends. Later, he finishes his studies in Conakry and is offered a once in a lifetime opportunity to study in France. His mother greatly disapproves, but Laye and his father convinces his mother. At the end of the book, Laye leaves for France, and promises to himself that he will return to his people. As I was reading the book, it made realize the position of Africa and where it stood as a country. I felt distinctly as I was reading throughout the book, western values and traditions were overrunning the traditions of not only Africa but Laye's life as well. Since the beginning of the book, he not an ordinary child in the village peoples eyes. He was one of the many who was sent out to attend school and be educated. ...read more.

"Originally it had been like the other huts, but gradually it began to acquire a European look" (169). His was trying to adapt to the style of the west through her son's experience in Conakry. She was expressing not only her love for Laye, but also her feelings toward the western tradition. While he was in his village, one of his friends' Chet was seriously ill. The medicine men gave him remedies and charms to help her but there was no significant change at all. Laye and his other friend knew that he had to see a white doctor at the hospital. Chet passed away after a week. Because of Laye's education from the west, he knew that the medicine men were insufficient. From experiences and education of the west, he has become a man with wisdom of both cultures. "The Dark Child" is a wonderful journey through Camara Laye's personal experiences. It shares many of his experiences and challenges through his life as a youth and young man. I really enjoyed the book and thought it was really educating. ?? ?? ?? ?? Identity1 ...read more.