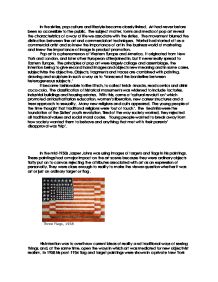 In the sixties, pop culture and lifestyle became closely linked. Art had never before been so accessible to the public.

In the sixties, pop culture and lifestyle became closely linked. Art had never before been so accessible to the public. The subject matter, forms and media of pop art reveal the characteristics of a way of life we associate with the sixties. The movement blurred the distinction between fine art and commercial art techniques. Warhol had started off as a commercial artist and so knew the importance of art in the business world of marketing and knew the importance of image in product promotion. Pop art is a phenomenon of Western Europe and America. ...read more.

It became fashionable to like Kitsch, to collect knick-knacks, read comics and drink coca-cola. The classification of historical monuments was widened to include factories, industrial buildings and housing estates. With this, came a 'cultural revolution' which promoted antiauthoritarian education, women's liberation, new career structures and a freer approach to sexuality. Many new religions and cults appeared. The young people of the time thought that traditional religions were 'out of touch'. The Beatniks were the foundation of the Sixties' youth revolution. Tired of the way society worked, they rejected all traditional values and social moral codes. ...read more.

His intention was to overthrow current ideas of reality and traditional ways of seeing things, and, at the same time, open the ways in which art was mediated for new objectivist realism. In 1958 his post-1954 flag and target paintings were shown in a private New York gallery and caused some controversy. His pictures opposed what was generally expected of art in the structural approach of the New York art scene. This was similar to Marc Duchamp and his 'Ready Mades', which were intended as attacks on traditional concepts of art and museums. Johns painted and sculpted trivial objects as real objects, but his brushwork was painterly and reminiscent of abstraction or Impressionism. He composed his pictures so that the trivial objects themselves often seemed abstract. ...read more.