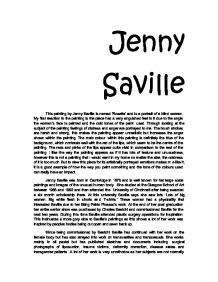 Jenny Saville. This painting by Jenny Saville is named Rosetta and is a portrait of a blind woman. My first reaction to the painting is the piece has a very anguished feel

Jenny Saville This painting by Jenny Saville is named 'Rosetta' and is a portrait of a blind woman. My first reaction to the painting is the piece has a very anguished feel to it due to the angle the woman's face is painted and the cold tones of the paint used. Through looking at the subject of the painting feelings of distress and anger are portrayed to me. The brush strokes are harsh and strong, this makes the painting appear unrealistic but increases the anger shown within the painting. The main colour within this painting is definitely the blue of the background, which contrasts well with the red of the lips, which seem to be the centre of the painting. ...read more.

She studied at the Glasgow School of Art between 1988 and 1992 and then attended the University of Cincinnati after being awarded a six month scholarship there. At this university Saville says she saw lots 'Lots of big women. Big white flesh in shorts and T-shirts.' These woman had a physicality that interested Saville due to her liking Pablo Picasso's work. At the end of her post graduation her entire senior show was purchased by Charles Saatchi and commissioned Saville for the next two years. During this time Saville attended plastic surgery operations for inspiration. This insinuates a more gory side to Saville's paintings as this shows a lot of her work was inspired by peoples bodies being cut open and sewn back up. ...read more.

Jenny Saville is a real painter's painter. She constructs painting with the weighty heft of sculpture. Her exaggerated nudes point up, with an agonizing frankness, the disparity between the way women are perceived and the way that they feel about their bodies. One of the most striking aspects of Jenny Saville's work is the sheer physicality of it. Jenny Saville paints skin with all the subtlety of a Swedish massage; violent, painful, bruising, bone crunching.' - Saatchi Gallery. After researching Jenny Saville I found I am a lot more interested in the background information of all her pieces and they seem to have large stories to them. Saville's fascination with unusual bodies is interesting, and the way she portrays them is very different. I responded to the painting 'Rosetta' by Saville by painting a copy of it with acrylics. ...read more.