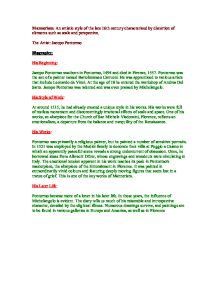 Mannerism: An artistic style of the late 16th century characterized by distortion of elements such as scale and perspective - The Artist: Jacopo Pontormo.

Mannerism: An artistic style of the late 16th century characterized by distortion of elements such as scale and perspective. The Artist: Jacopo Pontormo Biography: His Beginning: Jacopo Pontormo was born in Pontormo, 1494 and died in Firenze, 1557. Pontormo was the son of a painter named Bartolommeo Carrucci. He was apprenticed to various artists that include Leonardo da Vinci. At the age of 18 he entered the workshop of Andrea Del Sarto. Jacopo Pontormo was talented and was even praised by Michelangelo. His Style of Work: At around 1515, he had already created a unique style in his works. His works were full of restless movement and disconcertingly irrational effects of scale and space. One of his works, an altarpiece for the Church of San Michele Visdomini, Florence, reflects an emotionalism, a departure from the balance and tranquility of the Renaissance. ...read more.

It was painted in extraordinarily vivid colours and featuring deeply moving figures that seem lost in a trance of grief. This is one of the key works of Mannerism. His Later Life: Pontormo became more of a loner in his later life. In those years, the influence of Michelangelo is evident. The diary tells us much of his miserable and introspective character, derailed by the slightest illness. Numerous drawings survive, and paintings are to be found in various galleries in Europe and America, as well as in Florence A Work of Jacopo Pontormo: Work: Deposition Deposition 1528 Oil on wood, 313 x 192 cm Cappella Capponi, Santa Felicit�, Florence The Deposition is described as the artist's masterpiece. ...read more.

The expressions and attitudes of all the figures present express grief. The woman in front of the Virgin, probably Mary Magdalene, seems to be comforting her. The two figures holding up the deceased's body may have been angels, in the act of drawing Christ away from the Earthly family, and leading him finally into the arms of his Heavenly Father. The figures seem to be moving in rhythm very calmly. The two presumed angels seem to be able to bear the weight of the lifeless body easily. The connected group of figures, involved in a highly dramatic atmosphere, has harmony in the colour tones of pinks, blues and a dark background. The man wearing a strange hat, almost unnoticeable in the background of the painting behind the arm of the Virgin, could possibly be the artist himself. The painting has a distortion in certain people. Other Deposition Works: ...read more.