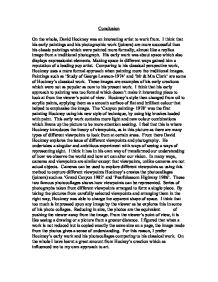 On the whole, David Hockney was an interesting artist to work from. I think that his early paintings and his photographic work

Conclusion On the whole, David Hockney was an interesting artist to work from. I think that his early paintings and his photographic work (joiners) are more successful than his classic paintings which were painted more formally, almost like a replica image from a traditional photograph. His early work was about space which also displays expressionist elements. Making space in different ways gained him a reputation of a leading pop artist. Comparing to his classical perspective work, Hockney uses a more formal approach when painting more the traditional images. Paintings such as 'Study of George Lawson-1974' and 'Mr & Mrs Clark' are some of Hockney's classical work. ...read more.

This early work contains more light and new colour combinations which livens up the picture to be more attention seeking. I feel that this is where Hockney introduces the theory of viewpoints, as in this picture as there are many types of different viewpoints to look from at certain areas. From there David Hockney explores the issue of different viewpoints and photography. He undertakes a singular and ambitious experiment with ways of seeing a ways of representing sight. I think it has in his own way of transformed our understanding of how we observe the world and how art can alter our vision. ...read more.

I think that too much is impressed upon any image by the viewer as he explores this in some of his photo collages. Reducing in size, the photos are the equivalent of pushing the viewer away from the image. From the viewer's point of view, it is like seeing a drawing or a picture from a greater distance. I figured that when a work is not reduced but is copied exactly the same size on a page, the image made from the photos gives a sense of understanding. For this reason, I prefer Hockney's early work and his photocollages comparing to his classical work. On the whole I have learnt a great amount from Hockey's creation which as influenced me to my own approach to art. ...read more.