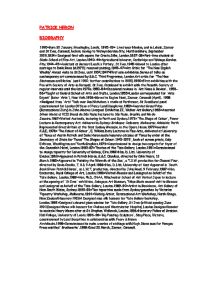 William Doty Lectures in Fine Arts, delivered at University of Texas at Austin Patrick and Delia Heron made honorary citizens of Texas by order of the Secretary of State for Texas' The Shapes of Colour: 1943-1978', book of screen prints, Kelp Editions, Waddington and Tooth Graphics.1979=Commissioned to design two carpets for foyer of the Cavendish Hotel, London.1980-87=Trustee of the Tate Gallery, London.1981=Commissioned to design tapestry for University of Galway, Eire.1982=Hon. D. Litt. University of Exeter.1983=Appeared in Patrick Heron, B.B.C. Omnibus, directed by Colin Nears, 13 March.1985=Appeared in 'Painting the Warmth of the Sun', a T.S.W. production for Channel Four, directed by Kevin Crooks, 7, 8 & 9 April.1986=Hon. D. Litt. University of Kent Appeared in 'South Bank Show: Patrick Heron', an L.W.T. ...read more.

Summary (1920-) the early work of the British painter, writer and designer was clearly influenced by Matisse and Braque. He developed his interest abstraction in 1956, having moved to St Ives and becoming a member of the strong community of British artists there. Although the subjects of his work- stripes, more abstract soft shapes and wiggly forms are constantly changing, the colours he uses are deliciously bright and fun. He has travelled to so many places and taught a lot of people, his work is quite delicate and amazing. He is a good artist, and people should look for his work. Here is an example of one of his Pieces of work: ...read more.