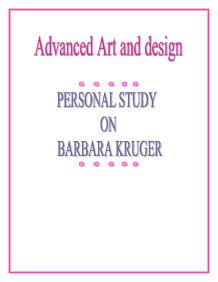 My chosen artist and why The artist that I have chosen to look at is Barbara Kruger. I have chose to look at her work because I found her work very appealing and it inspired me more then any other artist that I have researched. The reason I think her work inspired is because most of her work consists of violence against women and I am very against this matter. Kruger expresses her views on this matter through text and photography in her art work. It's like her aim is to show people how women are treated in this world. As I am a female myself I was attracted by her work and it made me want to research more in depth and create work in her style. She layers found photographs from existing sources with pithy and aggressive text that involves the viewer in the struggle for power and control that her captions speak to. Most of her work includes text in black or white letters against a slash of red background, some of her instantly recognizable slogans read "I shop therefore I am," and "Your body is a battleground." I think much of her text questions the viewer about feminism, classicism, consumerism, and individual autonomy and desire, although her black-and-white images are culled from the mainstream magazines that sell the very ideas she is disputing. Here is a few of Kruger's works attached together. It shows a view of what her work is about. She uses words such as "hate", "body" "battleground", and "world". These are big words, and have strong meanings. This shows that the message she is trying to get out to people is also big, strong and has a lot of meaning. Her works are direct and evoke an immediate response. Usually her style involves the cropping of a magazine or newspaper image enlarged in black and white. ...read more.

Also when looking at her work it doesn't seem as powerful as Kruger's work, I think this maybe because Kruger's work doesn't show much expression or live as Kruger's work like when looking at Holzer's work everything looks still everything looks at rest. For example looking at this image all you see is a women who seems to be running with a straight face on, it doesn't look real she look as if she's a zombie who doesn't seem to care about what is happening around her. You then notice the text on her t- shirt which says "Abuse as power comes as no surprise!" and it sort of confuses you a little because when you look at them women's face she doesn't even seem to be bothered whatsoever. But maybe that is perhaps the message that Holzer is trying to get through to other people that abuse comes as no surprise that's why the women probably has a straight face on because she may find abuse regular. That's why she's not surprised because she thinks of abuse as a normal everyday thing. Most of Holzer's work appears to be still, for example looking at the images above created by Holzer you can see that they are just photographs taken with the text already on. By this I mean she hasn't edited the pictures or done anything with them, all she has done is set everything up and take a picture and that's it her work is done. Whereas Kruger edits her picture, she uses different affects on the images so they look more attractive and adds short words or short sentences on the image so it's easier to read and so the public finds it interesting to read whereas if it was too long the public won't be bothered reading in other words may be bored doesn't get bored by reading it. By saying most of Holzer's work appears still, by this I also mean that most of her work is on real ...read more.

I want to base my work on the same issue as Kruger violence against women. I will also use the idea of using words and images in my work but not in the exact style of Kruger so it doesn't seem as though I have copied her work exactly. The reason I want to base my work on Kruger's is because looking at her work makes me think about the world about what is going on around me. One of the reasons why I like Kruger's work is because it brings up a number of questions in my mind such as, how our culture has changed from the past years. How people treat one another? How men take advantage women, and how the world has become so selfish. I think by basing my work in the style of Kruger's work will give me a deeper understanding of her work. It will help me to understand her work intensely and will give me more knowledge on the artist than I already have. The use of text in her work gives me an idea on how to use words in my work, on how to make my work look more attractive just like hers by using short direct phrases and words. I want my work to send out strong messages just like hers to make the viewer believe in me. In my work I will try and change the effects and the colour of the images the way she changes hers, and the way she makes the image look as though she made it rather than an existing picture. Also the expressions of the people in her image make the image look more real and attractive, it makes you feel like its true whatever she is trying to tell viewer. She makes the viewer believe in her work, that what she saying is true. This also influences my work to take more effective pictures with the correct expressions and text that go together and make the image look real and attractive that would make the viewer believe in you and your work. ...read more.