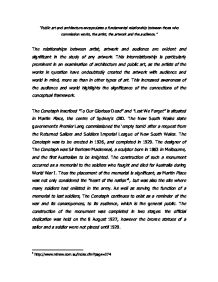 &quot;Public art and architecture encapsulates a fundamental relationship between those who commission works, the artist, the artwork and the audience.&quot;

"Public art and architecture encapsulates a fundamental relationship between those who commission works, the artist, the artwork and the audience." The relationships between artist, artwork and audience are evident and significant in the study of any artwork. This interrelationship is particularly prominent in an examination of architecture and public art, as the artists of the works in question have undoubtedly created the artwork with audience and world in mind, more so than in other types of art. This increased awareness of the audience and world highlights the significance of the connections of the conceptual framework. The Cenotaph inscribed "To Our Glorious Dead" and "Lest We Forget" is situated in Martin Place, the centre of Sydney's CBD. The New South Wales state government's Premier Lang commissioned the 'empty tomb' after a request from the Returned Sailors and Soldiers Imperial League of New South Wales. The Cenotaph was to be erected in 1926, and completed in 1929. The designer of The Cenotaph was Sir Bertram Mackennal, a sculptor born in 1863 in Melbourne, and the first Australian to be knighted. The construction of such a monument occurred as a memorial to the soldiers who fought and died for Australia during World War I. Thus the placement of the memorial is significant, as Martin Place was not only considered the "heart of the nation"1, but was also the site where many soldiers had enlisted in the army. ...read more.

The irony inherent in the scale of the endearing dog and its title demonstrates to the audience that popular items and icons in their world can possess deeper significance than they may have thought. The fact that Puppy is covered in up to 70,000 bright flowers sprouting from plants within the structure raises the fundamental question of 'what is hidden inside?'. This issue can be related to the hidden meanings which Koons finds within everyday objects such as basketballs, vacuum cleaners and traditionally 'cute' animals. The location of Puppy has consistently been near the entrance to an important cultural and artistic site. This positioning allows for access to a wider public, as well as proximity to institutions likely to attract people interested in art and perhaps with a greater art-related knowledge than the general passers-by. This combination of people who form the audience allows Koons' work to be received on a multitude of levels. The interaction between artist, world, audience and artwork epitomises the importance of relationships between these elements of the artworld. The Guggenheim Museum in Bilbao, Spain is an amazing accomplishment of the interaction between elements of the conceptual framework in itself. Designed by Frank Gehry and completed on October 3, 1997, the initiative for the creation of The Guggenheim Museum in the Basque region of Spain came from the Basque government. ...read more.

It is neither a major tourist attraction, nor a prolific icon of Australia or Sydney, however, The Federation Pavilion serves on a more local level, to remind and educate its audience about the beginnings of the Australian nation. Physically, the structure can be entered through a doorway, and the audience's eyes are directed to the interior of the dome, painted by Imants Tillers onto 1440 vitreous, enamelled-steel panels. The figure is appropriated from German artist Georg Baselitz, in accordance with Tillers' usual practice, and his artwork includes the words 'Faith', 'Hope' and 'Charity', which, according to art critic Nicholas Baume "the words...imposed on his torso add a kind of pathetic desperation to this tortured if resilient figure" although there are many other interpretations of this artwork. The collaboration of architect Alex Tzannes and artist Imants Tillers generated a building and monument of great cultural significance which is relevant to the audience. Any artwork intrinsically holds connections between itself, the artist, the audience, and world, however the importance of these relationships within art practice are particularly noticeable when studying architecture or art created with the intention of a public viewing. These forms of art rely on the audience for their interactions and reactions, and on their world for a setting and context. It is the combination and interrelationship of each of the elements of the conceptual framework which give meaning to an artwork, and which influences the artworld to continue developing. ...read more.