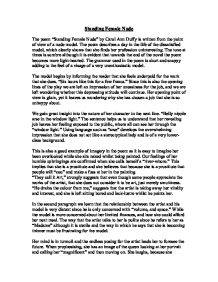 Standing Female Nude The poem "Standing Female Nude" by Carol Ann Duffy is written from the point of view of a nude model. The poem describes a day in the life of the dissatisfied model, which clearly shows that she finds her profession uninteresting. The tone at times is sombre although it is evident that towards the end of the novel the poem becomes more light-hearted. The grammar used in the poem is short and snappy adding to the feel of a visage of a very unenthusiastic model. The model begins by informing the reader that she feels underpaid for the work that she does. "Six hours like this for a few francs." Since this is also the opening lines of the play we are left an impression of her uneasiness for the job, and we are left wondering whether this depressing attitude will continue. Her opening point of view is glum, yet it leaves us wondering why she has chosen a job that she is so unhappy about. We gain great insight into the nature of her character in the next line. "Belly nipple arse in the window light." The sentence helps us to understand that her revealing job leaves her feeling exposed to the public, where all can see her through the "window light." Using language such as "arse" develops the overwhelming impression that she does not act like a stereotypical lady and is of a very lower-class background. ...read more.

She then says that he "stiffens for my warmth" which means that he longs to sleep with her. Although she replies in her monologue that "you've not the money to buy my arts." The word "arts" in this sentence is a pun on words, since the major theme of this poem is art and the arts that she is referring to is concerned with her prostitution. She believes that the artist cannot afford to sleep with her because he is very poor. The way in which she describes the artist, it sounds as she looks down on him by calling him a "little man," and I also think she enjoys the fact that this man wants to have her but she won't let him. Her views of the artist convey that it is like he is a different world from hers. Her very down-to-earth language portrays great contrast with the fussy artist who is more concerned in how the model poses. For example the artist tells the model, "you're getting thin....this is not good," which clearly shows the artist is very much a perfectionist and is not concerned with the feelings of the model. The last paragraph shows a contradictory tone to her earlier depressing mood, we learn that she enjoys having a good time. The contrasting characters of the model and the artist in this final paragraph change our earlier beliefs on the model. ...read more.

An example of this could be when the poem reads "his name is Georges," between paragraphs. This sense of incoherence is carried throughout the poem and from as early on as the title, "Standing Female Nude." The title is a sequence of words that are in quite an illogical order, although we understand the basic message, the fact that these words do not make proper sense give a feeling of incoherence or dysfunction. This unclear thinking could be attributed to her boredom since in the passage she also daydreams about the queen seeing her portrait. The poem "Standing Female Nude" by Carol Ann Duffy is an interior monologue in which the model describes her unsatisfying job. Her relationship with the artist is obviously very distant, and at times it seems like the model feels a sense of superiority since she knows that he wants to sleep with her although she doesn't let him. The tone is sombre although become more positive when she laughs about the queen and talks about visiting bars at night. The view of her job certainly conveys no interest, and she feels exposed to the public, and the short sentences give the impression of a very sterile, unemotional atmosphere. The last line states "It does not look like me," can be used to sum up the poem since it shows no remorse or kindness. It reiterates that the model takes no care in her job, or the artist that paints her, and cares solely about her personal interests that are mainly to do with money. ...read more.