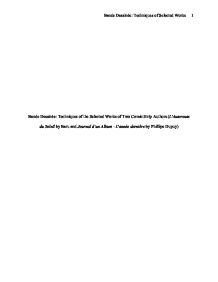 Bande Dessin�e: Techniques of the Selected Works of Two Comic Strip Authors (L'Autoroute du Soleil by Baru and Journal d'un Album - L'ann�e derni�re by Phillipe Dupuy) Abstract As Ms. Teresa Torres E�a so aptly puts it: Reading comics needs a constant reflection about the underlying ideologies and a very wide knowledge of literature, history of art, mythology and general history in order to completely understand the explicit and hidden references that are constantly used in comics. Interpreting and making comics is a form of knowledge about internal stylistic, metaphoric, iconic, formal or expressive means. It develops drawing, narrative and creative skills while providing the opportunity to express personal visions of the world. Although reading comics has several layers of understanding, interpreting comics is not superficial; it needs careful attention and disciplinary knowledge, especially if it is going to be used as a learning tool. (2004) Hopefully this paper will meet the objective of demonstrating a growing understanding of what the reading, viewing and interpretation of comics and -more specific to our topic- bande dessin�e, really means, as well as some of the techniques that are involved in both the creation and appreciation of two francophone comics in particular: L'autoroute du Soleil by Baru and L'annee Derniere by Phillip Dupuy. ...read more.

Baru combines the fast pace typical of manga with an eye for detail and the almost deliberate lack of kinetics that characterises a large part of bande dessin�e in favour of the expression of movement through the pure graphic composition of each panel (see Excerpts 1 and 2, Beaty, Nevins and Gravett, 2004). It is considered to be a seminal resistance piece by many critics and reviewers (Garcia, 2003), because in it Baru addressed several issues that were relevant in France in the mid-1990's, such as racism and anti-immigration. Excerpt 1 (Cover Page). Excerpt 2. Cover of the French version. Page 7. Baru makes good use of parallel montage and slanted "camera" angles -while putting a lot of thought into the composition, where nothing is accidental- to create an excellent specimen of a hybrid manga-bande dessin�e, or nouvelle manga, creation. Incidentally, a not-so-known fact is that L'Autoroute du Soleil is the expansion of one of Baru's previous works, Cours Camarade (Polom�, 1995). Journal d'un Album - L'ann�e derni�re The duo of Charles Berberian and Phillipe Dupuy had their first hit with Journal d'Henriette, but gained true worldwide popularity with their comic strip, Monsieur Jean, which lets us into the day-to-day life of a rather unremarkable, yet lovable, character: a thirty-something single man living in Paris. ...read more.

although allowing us to gain a rare view of an artist's inner world, also highly contrast with the cheerful, often witty, depiction offered by Berberian in the first part of the Diary, where there is more movement to the composition and a livelier use of lines and expressions in general. There is an important part in the Diary, L'ann�e Derniere (pp. 81-85), where we can see the full extent of Dupuy's breakdown when, at the height of his crisis, he actually goes so far as to assume the identity of Mr. Jean (Mora, 2002). This leads us to some obvious questions. How many pages of Mr. Jean were actually inspired by Dupuy's and, for that matter, Berberian's situations or problems at the time? Were they hoping that, through Mr. Jean, they could bring to the light and ultimately find solutions to their problems? Would Mr. Jean sometimes become an excuse for working out their concerns in black and white, getting it down on paper, so to speak? Whatever the answers to these questions may be, Journal d'un Album is a rare piece, a comic about the making of comics but also a catharsis (largely on Dupuy's part), an almost therapeutic exercise that took a lot of guts to publish and that we, as readers, are lucky to have available. Excerpt 3. Journal d'un Album, panel by Phillipe Dupuy. ...read more.