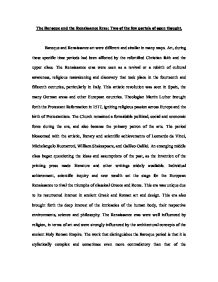 The Baroque and the Renaissance Eras: Two of the few portals of open thought

The Baroque and the Renaissance Eras: Two of the few portals of open thought. Baroque and Renaissance art were different and similar in many ways. Art, during these specific time periods had been affected by the refortified Christian faith and the upper class. The Renaissance eras were seen as a revival or a rebirth of cultural awareness, religious reawakening and discovery that took place in the fourteenth and fifteenth centuries, particularly in Italy. This artistic revolution was seen in Spain, the many German areas and other European countries. Theologian Martin Luther brought forth the Protestant Reformation in 1517, igniting religious passion across Europe and the birth of Protestantism. The Church remained a formidable political, social and economic force during the era, and also became the primary patron of the arts. The period blossomed with the artistic, literary and scientific achievements of Leonardo da Vinci, Michelangelo Buonarroti, William Shakespeare, and Galileo Galilei. An emerging middle class began questioning the ideas and assumptions of the past, as the invention of the printing press made literature and other writings widely available. Individual achievement, scientific inquiry and new wealth set the stage for the European Renaissance to rival the triumphs of classical Greece and Rome. This era was unique due to its resurrected interest in ancient Greek and Roman art and design. ...read more.

and The Assumption (1587, Gem�ldegalerie, Dresden, Germany). Annibale was summoned to Rome in 1595 to decorate the state apartments of the Palazzo Farnese, the city's most splendid new private palace. He began his masterpiece, the magnificent illusionistic ceiling frescoes (painting form in which fresh moist plater is used to be painted on with pigments dissolved in water) in the Galleria (a gallery) in 1597. Against a painted architectural background representing stucco heroic nudes, bronze plaques, and carved marble decorations are set what appear to be 11 huge easel paintings in ornate frames. They depict, in idealized human form, love scenes of the pagan gods, derived from the Roman poet Ovid's fables. Sculpting played an important part in the uplifting of the arts in both eras. Two sculptors- Donatello and Bernini stand out within their respective eras. Donato di Niccol� di Betto Bardi, universally known as Donatello, was born in Florence around 1386 and died there in 1466. The powerful expressive nature of his art made him the greatest sculptor of the early Renaissance. Masterpieces from the first phases of his career include the vigilant marble Saint George, made for the guildhall of Orsanmichele (1417, Museo Nazionale del Bargello, Florence); the gilt-bronze Saint Louis of Toulouse at the Church of Santa Croce, Florence (1422-25); and his bronze piece of wonder as the Feast of Herod and statuettes of angels on the baptismal font in the Baptistery of Siena (1425-29). ...read more.

While the church continued to support the musical arts, the Baroque age also produced a proliferation of secular music. In addition, the period brought the introduction of such vocal forms as opera, oratorio, and cantata, as well as orchestral forms as the sonata, concerto, and overture. As opera, in particular, became widespread in its popularity, the divas, virtuosos, and castrata of the age gained epic adoration from the masses. On a concluding note, it is necessary to convey that these two eras had a lot to offer to Europe, and in a wider context - to the world. It's glorious reawakening of the ancient architectural concepts of the Greeks and the Romans, the creative use of sound and it's intricacies in making newer musical art forms such as operas and oratorios, unlike many great treasures of history, have been clearly implemented in order to achieve more good than bad. The newer and more creative techniques of painting paved way to newer, brighter and more creative artists in both eras to make further change in techniques and artistic concepts. The sculptors of that time, by using bronze to a good use, have finally scraped the cusp of newer architectural concepts. People such as Donatello, Michaelangelo, Leonardo da Vinci and Bach have made great changes in their respective fields that people today can see as well. It still continues to this very day. ...read more.