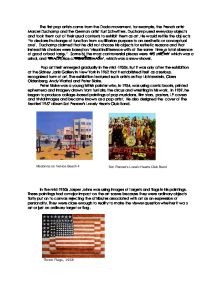 The first pop artists came from the Dada movement, for example, the French artist Marcel Duchamp and the German artist Kurt Schwitters.

The first pop artists came from the Dada movement, for example, the French artist Marcel Duchamp and the German artist Kurt Schwitters. Duchamp used everyday objects and took them out of their usual contexts to exhibit them as art. He would retitle the objects "to declare its change of function from a utilitarian purpose to an aesthetic or conceptual one". Duchamp claimed that he did not choose his objects for esthetic reasons and that instead his choices were based on "visual indifference with at the same time a total absence of good or bad taste." Some of the most controversial pieces were 'Fountain' which was a urinal, and 'In Advance of the Broken Arm', which was a snow shovel. Pop art itself emerged gradually in the mid-1950s. But it was only after the exhibition at the Sidney Janis Gallery in New York in 1962 that it established itself as a serious, recognized form of art. ...read more.

Added to this the fact that he consistently publicised his career and persona in texts such as "The Philosophy of Andy Warhol" and "POPism: The Warhol 60s", he emerged as the emblematic pop artist for the public. Warhol was his art. His studio and his wife Edie were part of his art work. He was willing to make studio practice a public sight and connected it with the world of entertainment and celebrity. Lichstenstein combined motifs from several sources in his compositions and used a stencil to produce the Benday dots. Rosenquist's training as a billboard painter had provided him with sufficient experience of enlarging a small image to a bigger scale. At first. in order to manually copy and enlarge images Warhol used an opaque projector to project the image on to canvas which he would then trace, like the other pop artists. Then his use of machine devices increased and he used a plethora of stamps and stencils to produce works like the Campbell's soup can paintings. ...read more.

The media and advertising were favorite subjects for Pop Art's often witty celebrations of consumer society, so there's little mystery as to why Warhol became part of a new form of art based on marketing and consumerism. In Warhol's mind everything could be seen as having a relationship to art. In his words: "Everything is beautiful. Pop is everything". Therefore the label of a soup can was art in itself as was any object created by a designer. At the heart of Pop Art was the transformation of mass culture, including advertising, into high art: soup can paintings by Andy Warhol; magazine ad collages by Richard Hamilton; comic strip paintings by Roy Lichtenstein. And yet, the line separating fine art from advertising continues to be drawn. For example, Andy Warhol's place in art history is contested. Barbara Rose called Warhol the Mary Magdalene of art history. She suggested in a 1970 review, that his art was trash and that he had sold himself to the public for fame and money. On the other hand, many critics contend that Warhol actually expanded the definition of what art could be. ...read more.