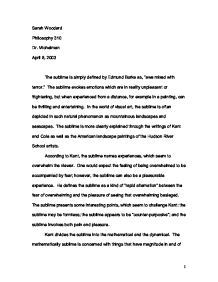 Sarah Woodard Philosophy 310 Dr. Michelman April 8, 2003 The sublime is simply defined by Edmund Burke as, "awe mixed with terror." The sublime evokes emotions which are in reality unpleasant or frightening, but when experienced from a distance, for example in a painting, can be thrilling and entertaining. In the world of visual art, the sublime is often depicted in such natural phenomenon as mountainous landscapes and seascapes. The sublime is more clearly explained through the writings of Kant and Cole as well as the American landscape paintings of the Hudson River School artists. According to Kant, the sublime names experiences, which seem to overwhelm the viewer. One would expect the feeling of being overwhelmed to be accompanied by fear; however, the sublime can also be a pleasurable experience. He defines the sublime as a kind of "rapid alternation" between the fear of overwhelming and the pleasure of seeing that overwhelming besieged. The sublime presents some interesting points, which seem to challenge Kant: the sublime may be formless; the sublime appears to be "counter-purposive"; and the sublime involves both pain and pleasure. ...read more.

He speaks of his love for the mountains, the forests, the water, and the sky of America. He compared "primitive" America to "industrialized" Europe. According to Cole, "...in civilized Europe the primitive feature of scenery have long since been destroyed or modified" (Cole 4). America seems to be headed toward the same destiny if they do not take action to prevent the desecration the natural wilderness. He painted the American landscape to not only to capture the combination of the beautiful and the sublime that our great nation has to offer but also to make the Americans ponder about the future of our natural scenery and what it has to offer. Thomas Cole presented the public with the moral question of the direction of America as a civilization in his painting titled "The Oxbow," completed in 1836. In this work the viewer sees a view from Mount Holyoke, Northampton, Massachusetts, after a thunderstorm. The lazy oxbow turning of the Connecticut River dominates the painting and is seen as a, "symbol of control over raw nature" (Hughes 146). The composition is divided essentially down the middle, with the sublime on the left and the beautiful on the right. ...read more.

This painting shows, "the eve of something - landscape as portent." "Twilight in the Wilderness" was painted directly before the beginning of the Civil War and seems to demonstrate his underlying feelings about the war. He seems to have sided with the Union as one can almost make out an American Flag in the sky. The tree trunk on the far left serves as a pole and the red stripes and blue stars are seen in the sky. This sublime landscape frightens the viewer of what is to come in he near future involving the war. Afterwards landscape such as this may be destroyed and loved ones may not be able to admire another beautiful sunset such as the one seen here. The sublime is clearly explained through the writings of Kant and Cole as well as the landscape paintings of the artists of the Hudson River School. Paintings by such artists as Cole and Church make a visual for these detailed writings. By studying these writings and paintings, one can better grasp the concept of the sublime and its effects on American landscape paintings of the nineteenth century. 1 ...read more.