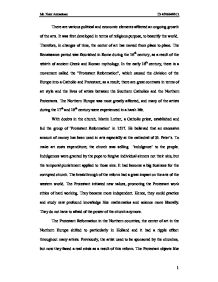 There are various political and economic elements affected an ongoing growth of the arts.

There are various political and economic elements affected an ongoing growth of the arts. It was first developed in terms of religious purpose, to beautify the world. Therefore, in changes of time, the center of art has moved from place to place. The Renaissance period was flourished in Rome during the 16th century, as a result of the rebirth of ancient Greek and Roman mythology. In the early 16th century, there is a movement called the "Protestant Reformation", which caused the division of the Europe into a Catholic and Protestant, as a result; there are great contrasts in terms of art style and the lives of artists between the Southern Catholics and the Northern Protestants. The Northern Europe was most greatly affected, and many of the artists during the 17th and 18th century were experienced in a harsh life. With doubts in the church, Martin Luther, a Catholic priest, established and led the group of 'Protestant Reformation' in 1517. He believed that an excessive amount of money has been used in arts especially at the cathedral of St. Peter's. To make art costs expenditure; the church was selling 'indulgence' to the people. Indulgences were granted by the pope to forgive individual sinners not their sins, but the temporal punishment applied to those sins. It had become a big business for the corrupted church. The breakthrough of the reform had a great impact on the arts of the western world. The Protestant initiated new values, promoting the Protestant work ethics of hard working. ...read more.

Here, The Milkmaid shows an ideal Protestant work ethic woman. The milk is an object, which symbolized the whiteness of purity heart and the bread represented the Christian service bread of Christ. Meanwhile, Girl With the Pearl Earring shows the virtue of 'chastity'. The pearl earring here represented the purity assembles with the Bible story of the pearl of great Christ. The reason why Vermeer painted women in moral paintings was to remind them to be good and men should have control women because according to the story from the Bible, it was woman who tempted Adam into eating the forbidden apple. Parallel to Vermeer, Chardin (1699-1779) was strongly influenced by Vermeer with his moralistic paintings. It expressed simplicity, ordinary things, quietness and still-life. In Soap Bubbles, the similar style with Verrmerr is the window depicted in the picture; therefore, the bubble represented the shortness of life. The picture reminded us how the life is short. Again, these moralistic paintings were according to the Protestant work ethics that shaped the lives of the Protestant people. The scientific revolution played a major part on the works of Rembrandt Van Rijn (1606-1669) and the use of the techniques of Jan Vermeer (1932-1975). We can see in Rembrandt's The Anatomy Lesson that he was influenced by he scientific revolution. The Students were observing at the corpse. Notice how reality the face of the people and the corpse is. The corpse looked bloated and it was unlike the corpse that portrait in the early periods. ...read more.

were painting portraits. The two painters were different in the way they portrait people in their pictures. Reynolds brought dramatic post in to his paintings as seen in Mrs. Siddons as 'Tragic Muse'. It shows a famous 18th century British actress, Mrs. Siddons. Notice at the face, you can see grandeur and tragic looks. Reynolds always has a character for his portrait. In contrast. Gainborough brought simplicity and calmness of nature in his paintings. In Cottage Girl, you can see how Gainsborough likes to put serene landscapes at the background. The girl looks real and down to earth because he did not put any dramatic symbols onto the portrait like Reynolds. The two paintings distinguish because of their way of portraying the character. Gainsborough loves simplicity and landscape, whereas Reynolds portraits were in an unnatural posing. In conclusion, when all kinds of art have most effectively served a religion system, that system itself usually been more than a pillar of society. The artist of the Reformation period developed their style by focusing more on the simplicity of the people in the society. Living in the Protestant country, they have to depend on the customers rather then being employed from the churches. Therefore, Dutch masters have to struggle for even though, Rembrandt died of poverty. These artists mention above make great changes to the subject of the paintings. Hence, with freedom to experiment, they were allows to paint ordinary subject and with the scientific revolution that helps Vermeer to create his masterpieces. All in all, no matter how the subject is changes, the purpose of art is still to beautify the world. Nevertheless, art is constantly growing bringing new forms and techniques. ...read more.