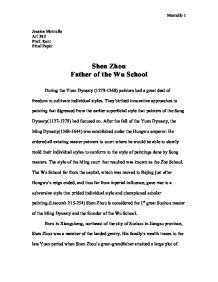 Jessica Montello Art 383 Prof. Kent Final Paper Shen Zhou Father of the Wu School During the Yuan Dynasty (1279-1368) painters had a great deal of freedom to cultivate individual styles. They birthed innovative approaches to painting that digressed from the earlier superficial style that painters of the Song Dynasty(1127-1279) had focused on. After the fall of the Yuan Dynasty, the Ming Dynasty(1368-1644) was established under the Hongwu emperor. He ordered all existing master painters to court where he would be able to slowly mold their individual styles to conform to the style of paintings done by Song masters. The style of the Ming court that resulted was known as the Zhe School. The Wu School far from the capital, which was moved to Bejing just after Hongwu's reign ended, and thus far from inperial influence, gave rise to a subversive style that prided individual style and championed scholar painting.(Liscomb 215-254) Shen Zhou is considered the 1st great Suzhou master of the Ming Dynasty and the founder of the Wu School. Born in Xiangcheng, northeast of the city of Suzhou in Jiangsu province, Shen Zhou was a member of the landed gentry. His family's wealth traces to the late Yuan period when Shen Zhou's great-grandfather attained a large plot of land after the dissolution of Mongol Rule. When the Yuan Dynasty fell and the Ming Dynasty was established, the head of the Shen family was given the position of tax collector under the Hongwu emperor. ...read more.

When paintings were done on a large scale, the textures of rocks, trees, rivers, were all altered through the artist's interpretation "producing a loss of objective existence and becoming the product of an inward vision."(Edwards, 6) Shen Chou's early works reflect this stressing of the small and minute and were all done on small scale either in actual size or in the way they were painted. Shen's earliest surviving work dates to 1464 and is small in size and delicate in execution. The inscription on the painting reads "She-Shan has for a long time been asking me for one of my illmade and deplorable creations, so at last, unhurriedly, I have done this one, and written a poem on it, to give him."(Cahill 83) The painting is characterized by stylistic cautiousness. It is a simple composition, but shows individuality in the reflection of the lower half in the upper half, something that Shen goes on to use in his later paintings, and shows a use of constrained dry brushwork in the drawing and fine dotting. The first large scale dated work is "Lofty Mount Lu" which was done in the style of Wang Meng. Painted when Shen Zhou was forty one, the work was a gift for his teacher Ch'en Ku'an. In the epigraph Shen writes that the main peak of Mount Lu represents Ch'en Ku'an himself. The painting is imposing, filled with contorted mountains, and at first glance seems to be a single mass brimming with texture and detail. ...read more.

A work that is exemplary of this late style is a handscroll called "The White Cloud Spring." The composition takes the viewer through notable sites in and around Suzhou starting with Tiger Hill. Throughout the scroll sites are labeled with small characters written in the Shen's hand indicated that the scroll was made for someone not familiar with Suzhou. "The White Cloud Spring" is done on silk a medium on which Shen rarely worked as his dry-brush style of drawing is not suited to be done on silk. The drawing is done in broad pale lines and "freely placed ts'un" form the shapes of the mountains. It is believed that Shen's aim was to correct some of the vices that colored the works of other literati painters including, an "overemphasis on sensitive brushwork, too slavish imitation of past styles."(Cahill 94) As Shen Zhou grew to be an old man, other artists had already begun imitating his style. Painters of the Wu School including his student Wen Cheng-ming, Lu Chih, and Ch'en Shun began taking up some features of his late style especially the use of broad pale brush strokes. Overall Shen Zhou was a very influential painter as the founder of the Wu School and the champion of individualism in painting during the Ming Dynasty. His landscapes show not only a reverence for older styles, but also a desire for innovation and experimentation with newer styles or brushwork and composition. ...read more.