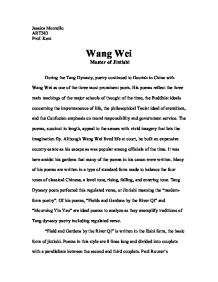 Jessica Montello ART383 Prof. Kent Wang Wei Master of Jintishi During the Tang Dynasty, poetry continued to flourish in China with Wang Wei as one of the three most prominent poets. His poems reflect the three main teachings of the major schools of thought of the time, the Buddhist ideals concerning the impermanence of life, the philosophical Taoist ideal of eremitism, and the Confucian emphasis on moral responsibility and government service. The poems, succinct in length, appeal to the senses with vivid imagery that lets the imagination fly. Although Wang Wei lived life at court, he built an expansive country estate as his escape as was popular among officials of the time. It was here amidst his gardens that many of the poems in his canon were written. Many of his poems are written in a type of standard form made to balance the four tones of classical Chinese, a level tone, rising, falling, and entering tone. Tang Dynasty poets perfected this regulated verse, or Jintishi meaning the "modern-form poetry". ...read more.

Wang Wei's "Mourning Yin Yao" is a very different poem from "Fields and Gardens by the River Qi" in not only form, but also in content. It is written in a form of jintishi called pail�, which follows the same conventions of parallelism as l�shi but may be any length. In this poem Wang Wei establishes his Buddhist beliefs in the opening couplet, which not only sets the scene by alerting us to the death of an individual, but also points to the Buddhist belief in life's transience, and the idea of wu or non-being. Parallelism can be seen clearly in the third and fifth couplets. In the third couplet Wang Wei pairs Yin Yao's mother and daughter greatly differing in age to emphasize how tragic Yin Yao's death is at such a young age. The fifth couplet pairs images, as was done in the previous poem, juxtaposing clouds floating in the sky with the birds that fly through that same sky. This poem is also very different in tone, rather than the quiet reflective tone of a recluse pondering at the end of the day, this ...read more.

Fields and Gardens by the River Qi I dwell apart by the River Qi, Where the Eastern wilds stretch far without hills. The sun darkens beyond the mulberry trees; The river glistens through the villages. Shepherd boys depart, gazing back to their hamlets; Hunting dogs return following their men. When a man's at peace, what business does he have? I shut fast my rustic door throughout the day. *Translation by Paul Rouzer Mourning Yin Yao How long can a life last? And once It's gone it's formless all over again. I think of how you waited for death: Ten thousand ways a heart wounds. Your gentle mother's still not buried, Your daughter's hardly turned ten, But outside the city, cold silence wind- scoured expanses, I listen to lament on and on. Clouds drift boundless skies, 8 birds wing through without a sound, and travelers travel deserted silence through a midday sun's frozen clarity. I remember you back then, still alive, Asking to study unborn life with me, But my guidance came too late. Sad How you never found understanding. And those old friends here with gifts- They never reached you either. So many Ways we failed you. All bitter lament, I Return to my brush-and-bramble gate. ...read more.