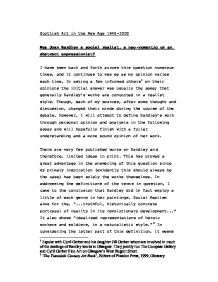 Was Joan Eardley a social realist, a neo-romantic or an abstract expressionist?

Scottish Art in the New Age 1945-2000 Was Joan Eardley a social realist, a neo-romantic or an abstract expressionist? I have been back and forth across this question numerous times, and it continues to vex me as my opinion varies each time. In asking a few informed others1 on their opinions the initial answer was usually the same; that generally Eardley's works are concocted in a realist style. Though, each of my sources, after some thought and discussion, changed their minds during the course of the debate. However, I will attempt to define Eardley's work through personal opinion and analysis in the following essay and will hopefully finish with a fuller understanding and a more sound opinion of her work. There are very few published works on Eardley and therefore, limited ideas in print. This has proved a great advantage in the answering of this question since my primary inspiration (evidently this should always be the case) has been solely the works themselves. In addressing the definitions of the terms in question, I came to the conclusion that Eardley did in fact employ a little of each genre in her paintings. Social Realism aims for the, "...truthful, historically concrete portrayal of reality in its revolutionary development..." It also shows "idealised representations of heroic workers and soldiers, in a naturalistic style."2 In considering the latter part of this definition, it seems fitting to refer to Eardley's 'The Mixer Men' of 1944 [Plate 1]. ...read more.

These artists and their work were constantly reassuring Eardley that what she was doing and what she aspired to do, was the right way forward.9 Eardley's works became more abstract as she progressed and developed. It is known that she saw many exhibitions in the 40's at Kelvingrove in Glasgow, of artists such as Van Gogh, Picasso and Matisse and she was excited by Van Gogh's work. Van Gogh's paintbrushes were loaded with emotion and the way in which he applied the paint gives the viewer an insight into mind and soul. Eardley clearly saw this in his work and took the idea on herself.10 Van Gogh talked of himself as a caricaturist - someone who takes the physical and mental sides of the sitter and exaggerates them in the prospective portrait. Eardley was a follower of this motif, though she took primarily the mental aspects of her sitters. The acute details of the physical were not her major concer. The Abstract Expressionists often sought inspiration from 'primitive' and childlike works and it seems fair to say that Eardley shared this admiration. The use of strong lines charged with determination and certainty is reminiscent of child-art. Children are not hesitant or cautious when scribbling something onto a page, resulting in something authentic and true. There is no danger of overworking a painting this way. ...read more.