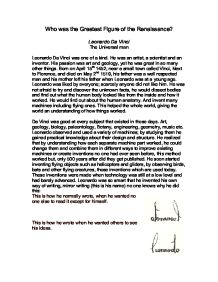 Who was the Greatest Figure of the Renaissance? Leonardo Da Vinci.

Who was the Greatest Figure of the Renaissance? Leonardo Da Vinci The Universal man Leonardo Da Vinci was one of a kind. He was an artist, a scientist and an inventor. His passion was art and geology, yet he was great in so many other things. Born on April 15th 1452, near a small town called Vinci, Next to Florence, and died on May 2nd 1519, his father was a well respected man and his mother left his father when Leonardo was at a young age. Leonardo was liked by everyone; scarcely anyone did not like him. He was not afraid to try and discover the unknown facts, he would dissect bodies and find out what the human body looked like from the inside and how it worked. ...read more.

These inventions were made when technology was still at a low level and had barely advanced. Leonardo was so smart that he invented his own way of writing, mirror writing (this is his name) no one knows why he did this: This is how he normally wrote, when he wanted no one else to read it except for himself. This is how he wrote when he wanted others to see his ideas. Leonardo discovered a lot about the human anatomy and how it worked. Giorgio Vasari, the artist who was also the first modern historian of art, described Leonardo Da Vinci as a "unique genetic mutation", and believed that "his genius was a gift from God" he also believed that Leonardo's advance to the anatomy of the human body was "remarkable". ...read more.

Leonardo did not finish all his artwork or in fact most of any of his work. They still are loved and appreciated nowadays. For example The Mona Lisa is considered one of his greatest art works and yet it is not complete. To summarize on this reflection on Leonardo Da Vinci, knowing the facts that he was knowledgeable in basically every subject, and his ideas and inventions were spectacular and now finding that many artists would look up to him for being a "genius" (such as Michelangelo and Raphael) shows that he almost certainly has to be the greatest figure of the renaissance. He has invented, drawn, painted, written, sculptured many things that are so brilliant and presumably no one else has done anything compared to all of his achievements. ...read more.