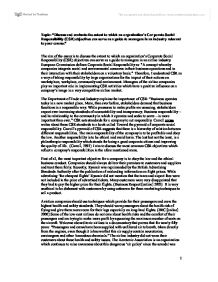 Discuss and evaluate the extent to which an organization(TM)s Corporate Social Responsibility (CRS) objectives can serve as a guide to managers in an industry relevant to your course.

The airline industry did not warn their customers about those health and safety issues. The Aerotoxic Association is an organization which continues to raise awareness about this dangerous 'air policy' since the scandal was revealed 2007. (Aerotoxic [online]2007) Aviation companies in addition to obeying the law should act ethically in the situations when the law is not specified. Another objective is to avoid unethical business conduct like accepting bribes for example gifts or other illegal methods of payments and favours. Five years ago a massive criminal conspiracy at London's Heathrow airport was discovered by a Human Smuggling Unit investigation. The Guardian article reports: "Corrupt security guards employed by airlines are being bribed to allow asylum seekers, criminals and even terrorist suspects to pass through checkpoints unchallenged, making a mockery of measures introduced in response to the 11 September terror attacks." (The Guardian, 2002) It is important that managers create a work environment which promotes honest and ethical behaviour. Employees should work as one team and most importantly respect the rights of other people. All employees ought to be judged by their qualifications, skills and achievements. It is unethical to reward an employee for reasons other than work related performance. (United Airlines [online] 2006) Managers have to respect an equal employment opportunity rule with regard to race, s*x, age, religion, disability or other characteristics. ...read more.

The company is trying to use electronic surveys instead of paper ones to cut down on the amount of used paper. They also offer their customers to offset carbon dioxide emissions by putting on their website a calculator which enable customers to check their usage of CO2 on a selected journey. Green passengers can then pay in compensation for the CO2 emissions caused by their flight. This money is invested in projects for renewable energy in developing countries (SAS [online] 2007) British Airways is the other company well known for reducing the impact on the environment. In fact, BA is the only airline in the world that has taken part in a carbon trading scheme. BA has achieved a significant improvement in fuel efficiency since 1990, cutting 60 million tonnes of carbon dioxide from the atmosphere (BA [online] 2007) In order to improve quality of the air BAA has introduced a car sharing scheme where employees are asked to make travel arrangements with other staff members to get to work and back home. The scheme makes a positive contribution to reducing the impact on environment. It has been estimated that on 44 million kilometers 9.3tones of the CO2 emission is cut and 4.7milion liters of fuel is saved. (Redington, 2005) In conclusion, business is not only a way of making money. Companies have power and should use it together with CSR techniques to change the world for better. ...read more.