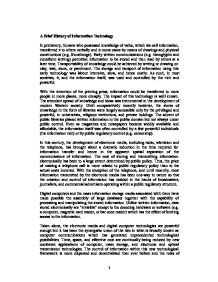 A Brief History of Information Technology

A Brief History of Information Technology In prehistory, humans who possessed knowledge of value, which we call information, transferred it to others verbally and in some cases by means of drawings and physical constructions (e.g. Stonehenge). Early written communications (e.g. hieroglyphs and cuneiform writing) permitted information to be stored and then read by others at a later time. Transportability of knowledge could be achieved by writing or drawing on clay, wax, stone, or parchment. The storage and transport of information using this early technology was labour intensive, slow, and hence costly. As such, in most societies, it, and the information itself, was used and controlled by the rich and powerful. With the invention of the printing press, information could be transferred to more people in more places, more cheaply. The impact of this technology is well known. The attendant spread of knowledge and ideas was instrumental in the development of modern Western society. Until comparatively recently however, the stores of knowledge in the form of libraries were largely accessible only by the privileged and powerful, in universities, religious institutions, and private holdings. ...read more.

Despite the above difficulties in assessing technology's impact, we have no choice but to try. As we shall see in the following section, failure to address the impact of the new information technology may well result in increasing control of information by a powerful few, and in further erosion of the rights and choices of individuals regarding the application of new technology. Information Technology and Society: Establishing Social Control It seems reasonable that if technology is at least partially the response of society to solving its problems and the desire to achieve progress by some measure, members of society should have some control over its application. Control includes the choice between alternatives, the timing and location of the application of a particular technology, the means of human interaction, and the means of regulation. The report to the President of France by Simon Nora and Alain Minc (published in 1978 as The Computerization of Society), was one of the first efforts to make a serious estimate of the future implications of what was then the emerging interconnection of communications and computers. Nora and Minc introduced the French neologism t�l�matique to describe the new technology, and were remarkably successful in identifying many of the social transformations which have occurred in the succeeding 15 years. ...read more.

Engineers and scientists must assume greater moral responsibility to publicly criticize inappropriate and misdirected technological developments such as the U.S. "Strategic Defence Initiative", or the substitution of human expertise by cost saving computer systems. Educators must help to foster both critical and creative facilities in students so that they are better equipped to make and articulate choices and assume effective control of new technologies. In the village near my farm, the bank which employs three full time workers is in danger of closing, to be replaced by a automatic teller machine. As an exercise in coming to grips with a real example of the application of information technology within a social system, consider the following questions: what roles do the bank and its employees currently play in the community?, what will be gained and lost by the bank's closing and who will be the winners and losers?, and, lastly, is there any practical response by the bank's customers which will enable them to establish control and choice in this situation? Suggested Reading Richard C. Dorf, Technology and Society, Boyd and Fraser Publishing Co., 1974 Simon Nora and Alain Minc, The Computerization of Society, MIT Press, 1981 Heather Menzies, Fast Forward and Out of Control, MacMillan of Canada, 1989 ?? ?? ?? ?? 1 ...read more.