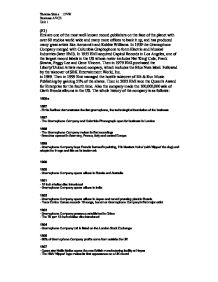 A case study of the media conglomerate EMI.

Because EMI is a PLC it means that the company has what is called 'limited liability'. This means that if the company were to have a law suit put against them then the owners of the company "shareholders" are not liable to lose anything accept for there shares in the company. Unlike a company with unlimited liability, which the owners could stand to lose more than just their companies, they also stand to lose what they posses like their homes and cars etc. But other factors of being a PLC are that the company can easily find ways to raise capital for expansion, especially as large well known firms are low risk ventures for banks, and also shares are able to be sold openly on the stock markets around the world. Unlike private limited companies who can only sell a limited number of shares and cannot sell them openly on the markets. There are also disadvantages to being a PLC, for example all PLC's need at least �50,000 to start up the status of a public limited company. Also every year an annual report and account must be published and a copy given to all shareholders, and also be made available for public viewing. An AGM must also be held every year so that the owners of Emi (the shareholder) can have a chance to try and influence the way in which the company works. But normally Also a high risk to the company is that shares sold on the stock market could be sold on to rival companies who would only need 50% + of the shares to take control. Another major process the company has to do is collect the right documentation and this has to be done even before the company can start trading. The business needs "a Memorandum of Association and Articles of Association to be sent to the company registrar" then the company registrar must issue a "Certificate of Incorporation" then the company issues a "prospectus" after this the ...read more.