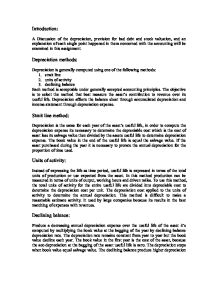 A Discussion of the depreciation, prevision for bad debt and stock valuation, and an explanation of each single point happened in them concerned with the accounting will be examined in this assignment.

3. actual uncollectible are debited to allowance for doubtful accounts and credited to accounts receivables Bad debt expense is reported in the income statement as an operating expense. Allowance for doubtful account is a contra asset account that shows the claims on customers that are expected to become uncollectible in the future. A contra account is used instead of a direct credit to account receivable because we do not know which customer will not pay. Allowance for doubtful account is not closed at the end of the fiscal year; it is deducted from account receivable in the current asset section of the balance sheet. Bases used for allowance method: 1. Percentage of sales: basis results in a better matching of expense with revenues-an income statement. The management establishes a percentage between the amount of credit sales and expected losses from uncollectible account. 2. Percentage of receivables: basis producers the better estimate of cash realizable value-a balance sheet. The management establishes a percentage relation ship between the amount of receivables and expected losses from uncollectible account. Direct write-off method: The bad debt losses are not estimated and no allowance account is used. When account is determined to be uncollectible, the loss is charged to bad debt expense. Bad debt expense is often record in a period different than the revenue was recorded. Thus no attempt is made to match bad debt expense to sales revenue in the income statement or to show the cash realizable value of the account receivable in the balance sheet. ...read more.

In any businesses the number of items of stock where net realizable value is below cost will almost certainly be very few, and the convention of materiality may well apply. Although the profit for any one year my be different from the computed on other basis, the total profit over the whole life of business will, if the valuation basis is changed, the profit will be as much a function of the change in method as a change in business fortunes. if a business does elect to change the basis, then in that year profit must be ascertained on both old and new basis in order that a proper comparison can be made. Conclusion: There are three methods to compute the depreciation, strait line method, units of activity method and declining balance method, Depletion The process of allocating the cost of natural resources. The depreciation reduces the cash and its reducing the company profit. Prevision for bad debt: Uncollectible accents receivable, it is affected the balance sheet and income statement. Two methods are used by accountant for uncollectible account: the allowance method and the direct write off method. The stock valuation has an input and an output. There is a current selling price and net realizable value in the output but in the input is historical cost and current replacement cost. We can compute the historical cost by these three methods: First in first out (FIFO), last in first out (LIFO), and weighted average. Frank Wood, Alan Sngstar. Business accounting 1, financial times. Jerry J.Weygand, Donald E. Kieso, Poul D. Kimmel. Accounting principles 5th edition, John Wiley & Sons. ...read more.