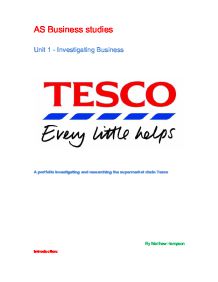 AS Business studies Unit 1 - Investigating Business A portfolio investigating and researching the supermarket chain Tesco By Matthew Hampson Introduction: About the business: Tesco is a UK based international food and general retail chain. It is the UK's largest retailer by sales and market share, with profits exceeding �3 billion. On a worldwide scale it is the world's third largest retailer falling only behind Wal-Mart and Carrefour. Tesco was founded in 1919 by Jack Cohen when he started selling groceries on a market stall in east London. The brand "Tesco" first appeared five years later in 1924. The brand was formed when Cohen took the initials of T.E Stockwell and added the first to letters of his sir name (C.O) and hence the name TESCO was formed. The first Tesco store opened in 1929 in Middlesex. By 1947 the company was already on the London stock exchange. Tesco grew through the 1950s and 60s until it had more than 800 stores acquired, in the most part through the purchase of other retail chains. Tesco pioneered the "pile it high, sell it cheap" ethos, this was in the most part due to Jack Cohen's belief that this was the best way for the business to succeed. In 1964 Tesco signed up with 'Green Shield Stamps' to further entice customers, to the modern day family this revolutionised shopping. However Lord Sainsbury disagreed with Cohen's new idea and market ploy saying it "did not have the best interests of the consumer in mind". Disregarding Sainsbury's comments Tesco continued with the stamps which became a huge winner for the business leading to better trade and higher levels of customers. Following Cohen's resignation in 1973, Cohen's son in law Leslie Porter took over as chairman. This was in part due to advice from banks and financial assessors who Tesco had employed to help them recover from their falling level of customers. ...read more.

I shall carry this analysis through studying their marketing mix, market research, enterprising skills, teams and their activities. I shall also analyze how this affects their aims and objectives within the business. Primary/Secondary research: Primary and secondary research are two ways in which to collect data. Primary is research in which you, another person, or a business may carry out to gather data on a specific topic or event. The advantage to primary research is that you can tailor the questionnaire, the test, or whichever way you are carrying out the research to ask the specific things you want. The data should, almost certainly be reliable and suit your cause. Furthermore the data in question should be more accurate; you know where the data has come from, and who asked it. There are however disadvantages to carrying out primary research; the main disadvantage being the increased expenditure that you incur over secondary research. It can also take a fairly long time to compose, gather and process the data and research you achieve and carry out. Secondary research is research that you gather information from research that has already been carried out (it is second hand); this information can be gathered from a variety of sources including the internet books and published research analysis etc. The research incurs the exact opposite pros and cons to primary research. Although it is very quick and inexpensive to carry out, the information you get may not be useful to the application you want it for, you can also not guarantee its reliability, it could have just been made up. Often a combination of both types a research is used to avoid huge cost, but also keeping a fairly high level of usefulness and reliability. Mass/Niche market: Within the retail sector there are a variety of companies and products that cater for most peoples "wants and needs". Not everyone has the same taste is a very important statement to think about in business. ...read more.

This shows that Tesco have clear areas that they can improve on to keep ahead, because by the look of it the main reason they seem to be the most successful retailer is that they are simply the biggest one, and offer the widest range. I think the case is, is that they can possibly try and expand into a slightly more unique experience if they want to try and attract new customers, because at the moment they seem to be at their optimum with their current set-up. What I have gathered suggests they don't really offer anything different, very mainstream. However being the top of that market is a very strong position to be in, because that is the most lucrative one. By the seams of it they seem to be doing most things correctly to achieve maximum profits; being the dominant force in a non-niche market. One of Tesco's main aims is to provide a great customer shopping experience. In the last question I asked "How do you rate Tesco's customer service"; the results clearly proved that they are achieving this aim to a veer high degree, with no one saying it was poor or awful; moreover the majority said that it was very good, which clearly documents how well they are going about achieving this objective, One other question I asked was "Which supermarket do you conceive to be best value for money?", most people didn't say Tesco but said, what are conceived to be the "budget" supermarkets, being ASDA, LIDL and ALDI. Interestingly these are all run by foreign businesses or are primarily based in foreign countries. ALDI and LIDL are both based in Germany and ASDA is run by Wal-Mart in America. I think the fact that foreign ideology about value for money is successful over here. If Tesco want to try and improve their value for money, they should perhaps take on board some of the techniques and ideas that the other supermarkets put into practice. Furthermore Tesco are currently trying to expand into Europe and notably, America which thus far has not been that successful. ...read more.