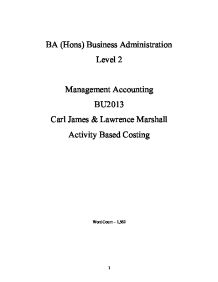 BA (Hons) Business Administration Level 2 Management Accounting BU2013 Carl James & Lawrence Marshall Activity Based Costing Word Count - 1,562 Abstract Activity-based costing is a practice focused on the 'budgeting and analysis process that evaluates overhead and operating expenses by linking costs to customers, services, products and orders.'(Chutchian-Ferranti. J et al (1999)). It was from the mid 1980's that this practice really started to develop due to flaws which were being identified in the traditional costing system. Tom Kennedy et al (2000) argues, 'that the current practice of ABC is now at its peak with 20 percent of companies worldwide using or either considering the practice of ABC.' 'Much has been written about the demise of the traditional accounting systems and the revolutionary attributes of activity based costing (ABC). Given the significant professional services that have developed on the back of it, it is interesting that the system is not as popular in practice as its supporters would suggest. ABC has been hailed as the answer to our prayers, but things are never that simple.' (Kennedy T and Bull R (2000) 'The Great Debate') In the above paragraph Tom Kennedy et al (2000) says ABC is 'not as popular in practice as its supporters would suggest.' ...read more.

Kip R Krumwiede et al (1998). With ABC needing this large amount of information to sustain implementing the practice many organisations are content with waiting for the supporting systems to be upgraded. Aamer Rafiq et al (2002) also argues, that the implementing of ABC will be a time consuming act and will need the organisations full attention. He also goes onto say that after the ABC model is up and running. 'In the first few months it will still require manual intervention while data feeds are automated. Also, the model must run for at least six months so that it can capture the impact of seasonality.' Clete O'Dell (1998) has reported 'that the biggest barrier to implementing ABC was getting people to commit their time.' This again backs up the views of Krumwiede and Rafiq in saying that organisations seem to reject ABC because of time scales needed. Looking at the other side of the argument ABC can be quite advantageous for the organisations who overcome the problem of time and resources. 'ABC creates opportunities for cost reduction, and supports the necessary keen price negotiations.' Says Etienne Van Geyt (2003). This is the case as it gives the organisation a clear view of the products cost price therefore arriving at an optimal price. ...read more.

It has used ABC to identify costs and charges for anesthesia care, electroconvulsive therapy and several surgical procedures. In all these procedures ABC was used to identify costs at different levels of the procedure and to hopefully to identify potential areas for cost savings or actual realized savings. Lisa Grandlich (2004) reports, 'ABC provides a mechanism for health care organisations to identify costs, develop appropriate charges, determine variances by providers to improve standardisation, and give detailed information for bench marking with peer facilities.' In conclusion it is hard to determine whether or not ABC is an answer to our prayers or is just simply one of many tools which are available to the organisations around the world. The success or failure of this method is not just rooted to today's economic climate but will also have instrumental affects in future business ventures. The popularity of this method of costing will more than likely be an ongoing debate, certain people will make certain statements either being positive towards ABC or negative. The only way in which the popularity of ABC can maybe be determined is if every organisation adopts it or rejects it. As far as the Great Debate from Tom Kennedy goes, the subject of ABC's pros and cons will be talked about for some time to come. The heading 'The Great Debate' seems to sum this subject up to a key. ...read more.