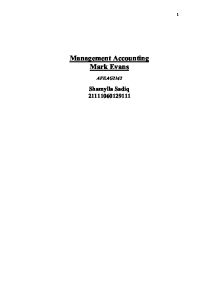 To ensure this they had set an ambitious but achievable ABM mission, which is phased over a three-year period. Mercury has taken some vital steps on the way to implementing a wide variety of activity-based approaches both for managing resources more efficiently and for detecting and optimising its sources of profitable business. It still has some way to go, but development so far has been very encouraging. Management at all ranks are now buying into the notion and benefits to be acquired from ABM. Activity-Based Costing (ABC) is a new component of cost analysis; Professor Robert Kaplan, Robin Cooper and H. Thomas Johnson presented it in Harvard in 1987. It has since been developed in many companies. The theory behind ABC is that costing should be much more that a financial scheme used by accountants, it should be part of the profit-making process of the business. Rather than simply monitoring and controlling costs after the event, costs should be planned for and managed before they have incurred. The process of developing an ABC system comprises of six phases with a total of sixteen steps, which is demonstrated below. These are the basic steps that are abided to in the approach, which is used, whether is it be a one-off review of activities and overheads or a frequent reporting system for analysis. The Activity-Based Costing Process There are in fact many uses of ABC, and can be analysed in various ways. The chart below gives a summary of the different uses and how they are broken down: Uses of ABC summarised ABC can have a big impact on companies, as it has done with Wavin, it has managed to become part of Wavin's day-to-day management customs. ...read more.

ABC highlights information, which was not identifiable with traditional accounting systems. Although ABC has many of its advantages as displayed by the case studies above, there are in fact disadvantages. Firstly, the implementation of ABC not only requires many resources but it is also very time consuming. The above case studies reveal how ABC/ABM has made improvements in many sectors, however, it is not made aware to the public, the difficulties and complications of implementing ABC within the business. Barclays experienced a great outcome when ABC tackled extreme problems in a short period of time, however, they do in fact confess the complications they experienced whilst applying the system. It is made aware from John Porteous article that Barclays Service Provision chose to put ABC into effect, but they had discovered that internal clients had difficulties understanding the basis of cost allocations. The same can be confirmed about ABM, Stephanie Gourdie's article points out that ABM is a successful application but it requires careful planning and radical thinking of the company's culture. Secondly, the Wavin case does in fact show a weakness of ABC; although the general outcome was pleasing it did in fact experience some fluctuations. At the beginning of applying ABC extra overhead costs were incurred, this may demonstrate either o That ABC is a system that takes time to take effect and in fact some organisations may experience many down falls, or o That ABC cannot be recommended purely as a replacing product costing system and in fact other broader systems could be taken into consideration, such as ABM/ABB At first sight the launch of ABC in the company can be a daunting experience, however many PC based software tools have been produced to make the procedure much easier. ...read more.