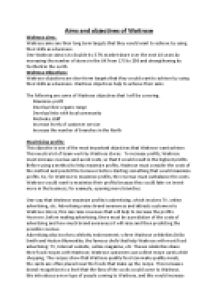 Aims and objectives of Waitrose

In return, Prince Charles has graced a number of Waitrose stores, and dined with senior Waitrose executives and their spouses. In August 2010, the Duchy range was launched with many new lines under the Duchy Originals from Waitrose brand. Also the duchy range is 100% British and the people that prefer that, would come to Waitrose. Motivating staff: This is about Waitrose employees and their motivation to work. For Waitrose to be successful it is vital that their staff to be motivated and well working within the business structure, so that Waitrose will progress well. It is very important that Waitrose staff are motivated, because it will improve the quality of service to the customer, for example, if a staff member is directing a customer to a particular store section, if the staff member is not motivated, it will show the customer that the staff don?t care and it may cause customer dissatisfaction, so the customer won?t come back, however if staff are motivated and confidant, the customer would appreciate the service and may come back again to Waitrose. Also this may make loyal customers that constantly come back to Waitrose. Customers coming back to Waitrose because of good service will increase revenue, which means it will help Waitrose to achieve their objective of maximising profits. ...read more.

These stores do not cost as much and are easy to start up and will generate more revenues than the costs of store. Conventional stores, which are the main stores, opening them is better in neighbourhoods that don?t have many stores around and away from big competitors like TESCO and ADSA. A main store would attract customers in the area that the store is in, and that would be really profitable for Waitrose. Increasing stores in that fashion will generate high revenues that would out balance total costs and help to Waitrose to achieve their objectives of maximising profits. Also the sales that the stores bring are likely to increase the market share of Waitrose. Additionally, Waitrose would have more customers and there reputation would increase. Increasing branches would extend the service to customers because it would be easy for customers to get to their nearest Waitrose branch, this also makes Waitrose branches for the economy easy to go to, which could gain Waitrose new customers, this makes shopping for customers more convenient and it would increase revenues. Also, increasing the branches in the north would classify Waitrose store to be national in England and Scotland. So overall, opening more branches in the north is a very important objective that Waitrose would want to achieve to become a more successful business. ...read more.