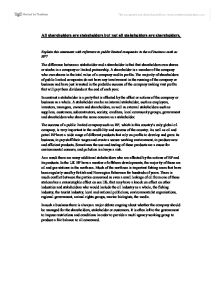 The success of a public limited company such as BP, which is this country's only global oil company, is very important to the credibility and success of the country. As well as oil and petrol BP have a wide range of different products that rely on profits to develop and grow its business, to pay staff their wages and create a secure working environment, to produce new and efficient products. Sometimes the use and testing of these products are a cause for environmental concern, and pollution is always a risk. ...read more.

There is much conflict between the parties concerned as even a small leakage of oil from one of these stations has a catasrotophic effect on sea life, that may have a knock on effect on other industries and stakeholders who would include the oil industry as a whole, the fishing industry, the tourist industry, local and national politicians, environmentalist organisations, regional government, animal rights groups, marine biologists, the media. In such a business there is always a major debate ongoing about whether the company should be managed for the shareholders, stakeholder or customers. It is often left to the government to impose restrictions and conditions in order to provide a multi agency working group to produce a fair balance to all concerned. ...read more.