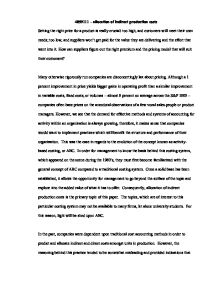 4099111 - allocation of indirect production costs Setting the right price for a product is really crucial: too high, and customers will meet their own needs; too low, and suppliers won't get paid for the value they are delivering and the effort that went into it. How can suppliers figure out the right premium and the pricing model that will suit their customers? Many otherwise rigorously run companies are disconcertingly lax about pricing. Although a 1 percent improvement in price yields bigger gains in operating profit than a similar improvement in variable costs, fixed costs, or volumes - almost 8 percent on average across the S&P 1000 - companies often base prices on the anecdotal observations of a few vocal sales-people or product managers. However, we see that the demand for effective methods and systems of accounting for activity within an organization is always growing, therefore, it makes sense that companies would want to implement practices which will benefit the structure and performance of their organization. This was the case in regards to the evolution of the concept known as activity-based costing, or ABC. In order for management to know the basis behind this costing system, which appeared on the scene during the 1980's, they must first become familiarized with the general concept of ABC compared to a traditional costing system. ...read more.

(Hicks, 1999). Finally, the traditional cost system compared to the ABC system tends to incorporate predetermined rates used based on budget while ABC focuses on capacity (Foster, 1991). Overall, the similarities between the two systems are to be somewhat expected but as indicated above, the differences between the two systems prove to be quite significant. Consequently, it is these differences that will have the greatest impact upon crucial decisions made by management because the assumptions made by an ABC system will illustrate operations, which prove to be beneficial and detrimental to the performance of a company while these factors may pass through a traditional system unnoticed. The adoption of technology has affected all areas of accounting and extensive applications have also been developed for organizations using an activity based costing system. These applications help simplify and translate into a better ability to control costs, provide more precise information to a widening group of decision-makers, and link the enterprise with its customers, suppliers and partners. Also, Executives are concerned with financial application integration rather than cross-functional applications such as manufacturing, financial and human resources. Having managerial and financial information systems integrated gives businesses a greater ability to analyze the data as well as streamlining accounting practices. With increased automation, production information can be collected in a central database and the data can be applied to cost pools in real time. ...read more.