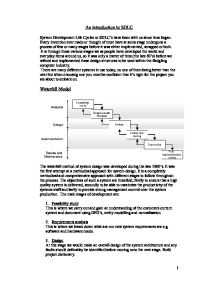 An introduction to SDLC System Development Life Cycles or SDLC's have been with us since time began. Every invention ever made or thought of must have at some stage undergone a process of few or many stages before it was either implemented, scrapped or both. It is through these various stages we as people have developed the world and everyday items around us, so it was only a matter of time (the late 60's) before we refined and implemented these design structures to be used within the fledgling computer industry. There are many different systems in use today, no one of them being better than the next but when choosing one you must be confident that it's right for the project you are about to embark on. ...read more.

Build project dictionary. 4. Coding and testing The programmers now begin programming the code and beta testing it. We would also train the people who will be using the new system. 5. Conversion This is also sometimes called integration, where we assemble all the pieces of the new system together and see if it matches up to the original system requirements. 6. Post implementation review This is where the software would be delivered to the customer and is ready for acceptance testing. Operating documentation will be generated and the procedures for the system will also be documented. The main benefits of using an SDLC such as the waterfall model (some people prefer to call it a method) are it provides a structured approach to design, from the initial need for a new system to be recognised to the detailed lyses of the business and practises of ...read more.

Barry Boehm while he was at TRW [Boehm, B., 1981:] Software Engineering Economics, Prentice Hall]. Generally this states that by every stage the cost will multiply by a factor of 10, so the outcome of this is that the Waterfall model is an expensive method to use. To not use an SDLC would be suicidal, as many people have found out to their own cost in the past, to simply implement ideas and software without using a solid, tried and tested method is I suppose like jumping into a car without an idea how to drive. To design and implement a new system you must use a life cycle model whether or not the Waterfall model must be determined, there are many others. To compare the Waterfall model against two other models I have drawn up a table, on this table I'll compare the Waterfall model to the Incremental and Prototype models. 1 ...read more.