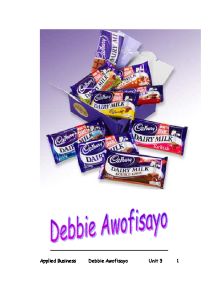 An overview of Cadbury.

Introduction {1.0} I am a marketing consultant working for Fredrick's Meinser and Associates in the heart of London. I will be carrying out several activities including building competitor analysis, market research, giving businesses advices to clients. I will be writing a report which will include my proposals and recommendations, which would be based on Cadburys Dairy Milk chocolate in this way I would be identifying the aims and objectives of Cadburys, identify their potential customers or target audiences and the process of segmentation used, undertake a market research for Cadburys Dairy Milk chocolate idea using both primary and secondary sources, device a realistic marketing mix for Cadburys Dairy Milk chocolate and finally justify all aspects of my devised marketing mix for Cadburys Dairy Milk chocolate. History The person, who created the Cadbury business, is John Cadbury in 1824. The business started as a shop in a fashionable place in Birmingham. It sold things such as tea and coffee, mustard and a new sideline - cocoa and drinking chocolate, which John Cadbury prepared him self using a mortar and pestle. In 1847 the Cadbury business became a partnership. This is because John Cadbury took his brother, which also made it a family business. The business was now known as The Cadbury Brothers. A factory in Birmingham was rented, to produce their products. In 1854 the company received its first Royal Warrant as 'manufacturers of cocoa and chocolate to Queen Victoria'. In 1856 John Cadbury's son Richard joined the company, followed in 1861 Richard and George became the second Cadbury brothers to run the business when their father retired due to failing health. The first Cadbury factory was built in the country; it was built in the green fields of Kings Norton, outside the city of Birmingham, between 1899.This places was named "Bournville", which was named by George Cadbury where he built the factory. This took place because George Cadbury had an image, with a saying, "If the country is a good place to live in, why not work in it?" ...read more.

Segmentation is a form of critical evaluation rather than a prescribed process or system, and hence no two markets are defined and segmented in the same way. There are many ways that a segment can be considered they are: * By Geography * By Psychographics * By Socio-cultural factors * By Demography Targeting is the second stage of the segment target position process. After the market has been separated into its segments, Cadburys will select a segment or series of segments and target them for example if they want to find out what people think about a certain product. There are three ways Cadburys could target their market which are: * Single segment product targets single product offering at a single segment in a market with many segments. For example Cadburys dairy milk has a high market reputation aimed at different people who are willing to pay more for it. * Mass marketing this is were differentiation is less important than cost Cadburys could aim a single products at all segments. An example of this is the approach taken by budgets airlines such as Go/Easy jet in the UK and Ryan Air in Eire. * Multi segment approach Cadburys will target a variety of different segments with series of differentiated product. As well as the physical aspect of our store changing we have to look at the market differently. Where it was once possible to take a pile it high sell it cheap approach, to achieve broad appeal to the population we need to cater to the needs of the population. This is achieved by breaking the population into groups and then releasing products and services that meet the needs of these groups. This is known as target marketing. Although we all appreciate the theoretical economies of scale given by mass marketing a single product, there are few products that appeal to everyone. Naturally this has led to a segmentation of markets as companies that marketed one product, now produce a range of products. ...read more.

is a question where the researcher doesn't provide the respondent with a set answer from which to choose. Rather, the respondent is asked to answer "in their own words". This produces mainly qualitative data. Strengths 1. The format of questionnaire design makes it difficult for the researcher to examine complex issues and opinions. Even where open-ended questions are used, the depth of answers that the respondent can provide tend to be more-limited than with almost any other method of research. This makes it difficult for a researcher to gather information that is rich in depth and detail. 2. With a postal questionnaire, the researcher can never be certain the person to whom the questionnaire is sent actually fills it in. For example, if your research is concerned with finding-out the opinions of women on a range of issues, it would be less than useful if an unknown number of the questionnaires sent by the researcher were filled-in by men 3. Where the researcher is not present, it's always difficult to know whether or not a respondent has understood a question properly. 4. The researcher has to hope the questions asked mean the same to all the respondents as they do to the researcher. This is a problem that can - to some extent - be avoided by conducting a Pilot Study prior to conducting the real survey 5. The response rate (that is, the number of questionnaires that are actually returned to the researcher) tends to be very low for postal questionnaires. A 20 - 25% return of questionnaires is probably something that most researchers would happily settle for and this may mean that a carefully-designed sample becomes unrepresentative of a target population. 6. The problem of the self-selecting sample is particularly apparent in relation to questionnaires. When a response rate is very low the responses received may only be the opinions of a very highly motivated section of the sample (that is, people with strong opinions who take the time and trouble to complete and return a questionnaire). ?? ?? ?? ?? 1 Applied Business Debbie Awofisayo Unit 3 ...read more.