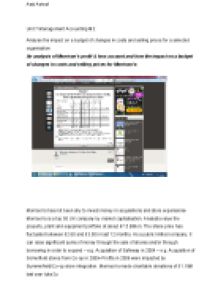 Morrison has massively improved its own brand products which offer value for money and appeals to consumers who are willing to buy bargain products rather than premium quality products especially during tough economic times. Annual Statement (2010) states Sales of our own label ?Value? range grew by 34% as consumers tightened their belts in a challenging economic environment. The following table taken from the Annual Statement 2010 further illustrates how Morrison's has consolidated its position in the UK market during the past few years: Therefore it can concluded on the basis of the above figures that Morrison's was able to enhance its position with the retail supermarket industry during adverse economic climate due to the fact it was able to supply quality products at modest prices than its competitors. During pricing, cost is a key to think about, but the manager should also know better about the relationship between cost, volume and profit. As we know, Morrison?s processes most of the fresh food though our own manufacturing facilities and sell it in its stores. ...read more.

Meanwhile, the manager can know more about this efficient method of work by investigation and see if it is feasible to implement this new method to other processing departments of Morrison?s. Disadvantageous variance from direct material makes the manager understand the cost change of materials so as to control cost and budget precisely for the future, while disadvantageous variance from direct labour will give the manager a hint to investigate the reason and take actions in time preventing the issue from enlarging. Conclusion: Cost concept is very essential for decision making process. As the manager is the higher authority of any organization, they are to develop different types of policies and strategy to run the business successfully. So development of cost reduction procedures is one of the most important strategies. It is very important to develop cost reduction procedures because it increases the profit of the firm through reducing cost of production. If the manager cannot control cost their operating expense will be higher and higher and therefore reducing the profit of the firm. A firm which cannot control cost cannot sustain in the competitive business world. So to make proper investment decisions financial managers should have clear knowledge about financial principles and techniques for better performance. ...read more.