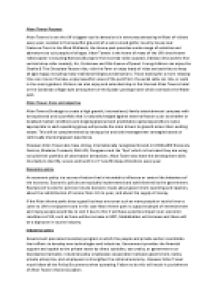 ﻿Alton Tower Purpose Alton Towers is one the UK's biggest tourist attractions in every way attracting millions of visitors every year. Located in the beautiful grounds of a semi-ruined gothic country house near Stoke-on-Trent in the West Midlands, the theme park provides a wide range of activities and adventures to suit people of all ages. Alton Towers is the home of many of the UK's best known rollercoaster?s including Nemesis (Europe's first inverted roller coaster), Oblivion (the world's first vertical drop roller coaster), Air, Corkscrew and Rita Queen of Speed. Young children can enjoy the Charlie & The Chocolate Factory ride, visit the Farm or enjoy loads of rides and activities to keep all ages happy including many traditional fairground attractions. Those looking for a more relaxing time can row on the lake, enjoy beautiful views of the park from the aerial cable car ride, or walk in the scenic gardens. Visitors can also enjoy and extended stay in the themed Alton Towers hotel or the Caribbean village style atmosphere of the Splash Landings hotel which overlooks the Water park. Alton Tower Aims and objective Alton Towers Strategy to create a high growth, international, family entertainment company with strong brands and a portfolio that ...read more.

However Alton Tower must follow all the Policy Documents when operating. Failure to do this will result in punishment of Alton Towers Owners/Leaders. Competition policy Competition puts businesses under constant pressure to offer the best possible range of goods at the best possible prices, because if they don't, consumers have the choice to buy elsewhere. In a free market, business should be a competitive game with consumers as the beneficiaries. If Alton Tower is not competitive they will be making less money, and less money will be taken off them from tax, which could damage the economic environment. If Alton Tower is found to be operating in a non competitive way, their cases may be referred to the Competition Commission for full investigation. Fiscal policy Government spending policies that influence macroeconomic conditions. Through fiscal policy, regulators attempt to improve unemployment rates, control inflation, stabilize business cycles and influence interest rates in an effort to control the economy. But the reason the government do this, is because they want to balance the amount of money available for public spending and the level of taxation as these are important because changes in either can affect aggregate demand and therefore, unemployment levels and inflation. ...read more.

Environment policy To protect the environment government always force the theme park management to be stick on this issue and aware there costumers to follow the regulation such as left eating items, should be through in dustbins and whole theme park should be Cover up by dustbins . Cars should be not allowed in theme parks they should have separate parking yard due to pollution which is spoiling the environment. Government should put billboards of Environmental protection and regulation on entrance of theme parks to aware people. The 1st issue that create environmental issue arise in 1924 when its operation was bought by Alton tower after that it was under the hold of army during the period of war. War destruction totally destroy the park as Alton towers leaders and owners are aware of the during and after war side effect on the local environment it was in poor condition when it handed over to Alton tower again for refurbishment it cause major effect to environment. As there is no way to mitigate the effect of such event as it arise such event are out of control of organisation, as its obvious during war period it?s impossible to protect any area and property. Therefore the one action is to control such events is in hands of government and their relation with other countries. ...read more.