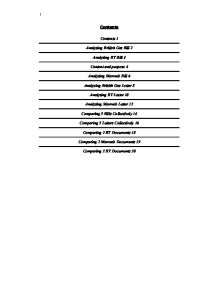 Contents Contents 1 Analysing British Gas Bill 2 Analysing BT Bill 4 Content and purpose 4 Analysing Manweb Bill 6 Analysing British Gas Letter 8 Analysing BT Letter 10 Analysing Manweb Letter 12 Comparing 3 Bills Collectively 14 Comparing 3 Letters Collectively 16 Comparing 2 BT Documents 18 Comparing 2 Manweb Documents 19 Comparing 2 BT Documents 20 Analysing British Gas Bill Content and purpose * The purpose of this British Gas bill is to inform the person about there monthly gas bill. * This document is aimed at one person only. I know this because the bill is addressed to Mrs M Edwards and her only. * The document contains a lot of important information. It contains the amount of money the person needs to pay and what it is getting paid for. It also has the address and phone number of British Gas and the receiver, it also has the date the bill was sent. It contains all of the company's information so the receiver knows who it is of but also incase they have any problems they know who to contact and how. It also has information at the side of the bill informing the reciever what changes are going to be made in the future with the company. It also gives the payment date and how too save money and keep the gas bill low. Style * The document is supposed to be aimed at only person which is Mrs M Edwards. This means that British Gas is allowed to put personal information on the bill because only the receiver is meant to see the bill. Now the bill is aimed at one person the company is allowed to put account numbers and addresses down. The age group will be generally over 18, because you have to be 18 and over to own your own house and gas account. ...read more.

* They both contain the companies addresses and details * They both contain account numbers and reference numbers. * Both documents are A4 * Both documents have no footer with no header. * They both contain margins * They both share a logo. * The logo is in the same place on both documents. * Both documents don't use shading. Differences * The letter has a different layout to the bill. The letter looks a lot more professional with its layout and the bill the looks like an ordinary bill. * The bill is used to inform the customer of bills that need to be paid and the letter is to inform the customer about the customers call level. * The letter has a signing off signature from the customer relations manager, but the bill has no signature at all this is because it is from the company not a person. * The bills logo is smaller than the letters logo. * The letter has more white space than the bill. Possible Reasons for these differences * The biggest reason for these differences is because the Letter is a lot more formal and professional. The bill is just something to inform the customer how much money they owe to the company. Also Bills are a lot more serious so the letter is a lot more relaxed. * The letter has a lot more white space because the letter has less too say. Also the bill has to have a lot of information on it therefore there will be less white space. Index Analysing, 1, 2, 4, 6, 8, 10, 12 Bill, 1, 2, 3, 4, 5, 6, 19, 20 British Gas, 1, 2, 3, 8, 9 BT, 1, 4, 10, 11, 18, 20 Letter, 1, 8, 10, 12, 18, 19, 20 Manweb, 1, 6, 12, 19 Presentation and Layout, 3, 4, 7, 8, 10, 12 Style, 2, 4, 6, 8, 10, 12 Types of Information, 2, 4, 6, 8, 10, 12 1 1 ...read more.