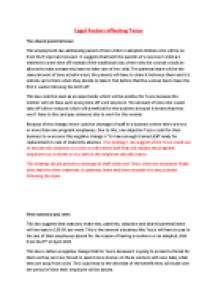 ﻿Legal Factors affecting Tesco The shared parental leave This employment law addressing parent of born child or adopted children who will be on from the 5 April and onward. It suggests that both the parents of a new born child are entitled to some time off instead of the traditional way where only the woman would be allowed to take a maternity leave to take care of her child. The parental leave will be the same amount of time as before but, the parents will have to share it between them and it is entirely up to them when they decide to take it. But before that the woman has to have the first 2 weeks following the birth off. This law could be seen as an opportunity which will be positive for Tesco because the mother will not have such a long time off work anymore. The amount of tome she would take off will be reduced which will beneficial for the business because it means that they won?t have to hire and pay someone else to work for the woman. Because of this change, there could be shortage of staff in a business where there are two or more than one pregnant employees. Due to this, one objective Tesco could for their business to overcome this negative change is ?to have enough trained staff ready for replacement in case of maternity absence. ...read more.

This economical factor is about how strong the growth of the UK consumers economic has become in 2014 and predicts how it will continue to be in the future. It says that the consumers spending growth has been increasingly growing for the past two years and that confidence and borrowing has also gone up since mid-2012 have been reflected in a falling savings ratio, giving an extra boost to spending over and above disposable income growth. This change in the economy can be a positive thing businesses operating in the UK like Tesco because it present them with an opportunity. The change has caused the consumers? confidence to increase and has strengthened the consumer?s spending power too. Due to this economical opportunity will, Tesco will be able to boost their sales because consumers will be more confident and shop more since their shopping power has increased, they will be able to afford quality and maybe even luxurious products. By doing so retailers like Tesco will also win by making more sales, more profits and benefits. Since this change is not a threat but rather an opportunity for Tesco, the goal i can suggest to them in order for them make sure they make as much sales, profits and benefits as possible is to simply attract more customers. One strategy I can suggest for Tesco to obtain the objective above is to make more eye-catching adverts and promotion to make sure their targeted customers hear and notice them loud and clearly. ...read more.

The rise of the Y generation is something that is threatening most retailers because in order to crack this new change and adapt to it, retailers will have to come up with new strategies and methods. By doing so, Tesco will be able to survive this change and adapt to it in order to attract more customers from this Y generation. This way they could also be on top of their games and beat every other competitors. Conclusion Through identifying the different legal, economic, political and social factors that could influence the future of Tesco, I have found several threats they could seriously struggle with but the most important change and the biggest of them all was the change which states that over the next ten years two-thirds of all retail spending growth will come from those aged 55 and over. I chose this change because as explained above, this threat will cause Tesco to make radical and major changes to the way they operate right now in their business activity. And if nit handled properly, it could affect them to change them and their business performance. This is why it is really important for a business no matter its size to always carry out continual research into external influences. By doing so, they will be able to prepare for the types of challenges they have ahead them and plan to overcome them before they even happen. ...read more.