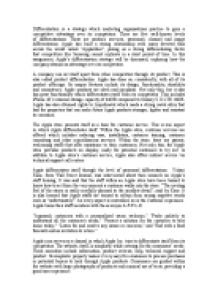 ﻿Differentiation is a strategy which marketing organisations practice to gain a competitive advantage over its competitors. There are five well-known levels of differentiations. These are product, services, personnel, channel and image differentiation. Apple has built a strong relationship with many devoted fans across the world called ?Applellites?, posing as a strong differentiating factor that competitors like Samsung cannot replicate in a short period of time. In this assignment, Apple?s differentiation strategy will be discussed, exploring how the company obtains an advantage over its competitors. A company can set itself apart from other competitors through its product. This is also called product differentiation. Apple has done so, consistently, with all of its product offerings. Its unique features include its design, functionality, durability and consistency. ...read more.

In addition to Apple store?s customer service, Apple also offers indirect service via technical support call centres. Apple differentiates itself through the level of personnel differentiation. Yukari Kane, from Wall Street Journal, was interviewed about their research on Apple?s staff training. It was said that the staff within an Apple store have been trained to know how to act from the very moment a customer walks into the store. ?The inviting feel of the stores is really carefully planned to the smallest detail?, said by Kane. It is also learned that Apple staffs are trained to refrain from saying negative words such as ?unfortunately?. As every aspect is controlled, so is the customer experience. Apple trains their staff members with the acronym A-P-P-L-E: "Approach customers with a personalized warm welcome," "Probe politely to understand all the ...read more.

Apple, however, has successfully been made known to have the brand logo of a bitten apple. It has been one of the most famous logos around the world which contributed to Apple?s popularity as it is continually seen everywhere. Apple is also associated with elegance and simplicity. This image is carried through consistently in everything Apple does which creates a strong, credible brand that differentiates the company from other companies. Steve Job has been made famous and is greatly associated with Apple Inc., especially through his keynote speeches. While Apple is increasingly pressurised by competitors such as Samsung, they possess a strong differentiating factor which Samsung is unable to replicate overnight. Through Apple?s great product, services, personnel, channel and image differentiation, the company was able to create a strong relationship with the customers, thus explaining Apple?s competitive advantage over its competitors. ...read more.