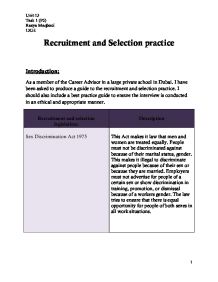 As a member of the Career Advisor in a large private school in Dubai. I have been asked to produce a guide to the recruitment and selection practice.

Recruitment and Selection practice Introduction: As a member of the Career Advisor in a large private school in Dubai. I have been asked to produce a guide to the recruitment and selection practice. I should also include a best practice guide to ensure the interview is conducted in an ethical and appropriate manner. Recruitment and selection legislation: Description Sex Discrimination Act 1975 This Act makes it law that men and women are treated equally. People must not be discriminated against because of their marital status, gender. This makes it illegal to discriminate against people because of their sex or because they are married. Employers must not advertise for people of a certain sex or show discrimination in training, promotion, or dismissal because of a workers gender. The law tries to ensure that there is equal opportunity for people of both sexes in all work situations. Race Relations Act 1976 This Act makes it unlawful for anyone to be discriminated against on the grounds of race, colour, nationality, ethnic origin. It's unlawful for an employer to discriminate against employee. Employees are protected against racial discrimination at all stages of employment. ...read more.

Employment Act 2002 The Employment Act 2002 introduces a wide range of new legislation covering such matters as work and parents, dispute resolution in the workplace, and improvements to employment procedures. This Act tries to finish disputes more quickly by introducing grievance and disciplinary procedures into the workplace. It gives rights to people who are on fixed term contracts. National minimum wage The National Minimum Wage is the amount of money set by the government as recommended by the low pay commission. Each year the amount goes up but it is the minimum amount that workers aged 16 or over must be paid for doing a job work. Data Protection 1998 This Act deals with access to personal data. It applies to the processing of data and information by a computer source. This Act is based upon a set of principles that binds a user or an organisation into following a set of procedures offering assurances that data is kept secure. It requires anyone processing personal data (i.e. data relating to a "living individual"- for example staff or pupils). Failure to do so is a criminal offence. ...read more.

In these recent years many application forms now ask applicants to make it clear if they have personal links with any member of the management team or other significant individuals within the school. The good example of this is teachers having links to members of the school, so that they can easily get recruit. Gender and ethnic balance on panels: It is also important from an ethical viewpoint to make sure that the interview process, including the interview panel, reflects a balance of employees or managers of both genders, and different ethnic groups; e.g. white, black or Asian. This is important because different ethnic group members might provide a more balanced judgement of a candidate and have different qualities that they think are important in an employee. However, it is desirable for school to achieve a gender or an ethnicity balance on interview panels to ensure job applicants of either gender and of different ethnicities are not overlooked. However, in cases where a gender/ethnicity balance cannot be achieved due to grade restrictions on the panel, it has been agreed that panel members may hold equivalent graded posts to the post being interviewed in order to offer a wider field of possible panel members. ?? ?? ?? ?? Unit 13 Task 1 (P5) Raeya Maqbool 13G2 1 ...read more.