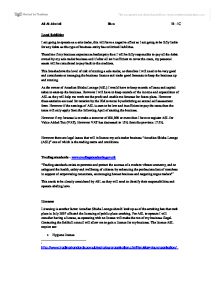 Legal liabilities I am going to operate as a sole trader, this will have a negative effect as I am going to be fully liable for any debts as this type of business entity has unlimited liabilities. Therefore if my business experiences bankruptcy then I will be fully responsible to pay all the debts owned by my sole trader business and if after all isn't sufficient to cover the costs, my personal assets will be considered to pay back to the creditors. This foreshadows the level of risk of running a sole trader, so therefore I will need to be very good and considerate at managing the business finance and make good forecasts to keep the business up and running. As the owner of Arcadian Shisha Lounge (ASL) I would have to keep records of loans and capital taken to start-up the business. However I will have to keep records of the income and expenditure of ASL as they will help me work out the profit and enable me forecast for future plans. However these statistics are used for taxation by the HM revenue by submitting an annual self assessment form. ...read more.

ASL need to make sure that if they employ staff, they pay them at least the minimum wage and don't breach this law to avoid punishment. These are the current minimum wage rates (October 2009): * �5.80 an hour for workers aged 22 and over * 4.83 an hour for workers aged 18 to 21 * �3.57 an hour for workers aged 16 to 17 (Source: http://www.direct.gov.uk/en/Nl1/Newsroom/DG_178175) ASL failing to pay their employees at least the minimum wage then I as the owner of ASL will be held liable for the consequences. Failure to pay at least the minimum wage will lead to repaying back the wage and paying a financial penalty. Since 6 April 2009 the penalty has been set at 50 per cent of the total underpayment and a penalty from a minimum of �100 to �5,000. 3 It is crucially important that ASL make clear the goods and services they are providing to their customers. For example the type of Shisha flavours they are selling and the percentage of tobacco on each one of them. This will prevent any confusion and disagreements between the business and its customers. ...read more.

There are several factors that the introduction of the smoking ban influenced, including: Shisha bars must have at least 50% air circulation9 - this means that ASL should consider rebuilding the premises to suit the requirements of 50% air circulation. However the 50% circulation does not mean 50% roof and 50% non roof, but the 50% air circulation can include a big opened door to participate in the 50% open air circulation. Licensing - due to the smoking ban, the licensing changed in pubs and public cafes. The license that is going to allow ASL to operate legally is A2 licensing as it will allow public smoking within the lounge, but only according to the regulations i.e. 50% air circulations. Age Restriction - As of 1st October 2007 the law for selling tobacco changed. It became illegal for you to sell tobacco products to anyone under the age of 18 in England and Wales.10 This restricts ASL from serving customers under the age of 18. 1 http://www.tradingstandards.gov.uk/extra/ourorganisation.cfm?frmAlias=/ourorganisation/ 2 http://www.opsi.gov.uk/Acts/acts1998/ukpga_19980039_en_1#pb1-l1g1 3 http://www.businesslink.gov.uk/bdotg/action/detail?type=RESOURCES&itemId=1074404112 4 http://www.berr.gov.uk/whatwedo/consumers/fact-sheets/page38311.html 5 http://www.berr.gov.uk/whatwedo/consumers/fact-sheets/page38311.html 6 http://www.opsi.gov.uk/RevisedStatutes/Acts/ukpga/1968/cukpga_19680029_en_1 7 http://www.healthandsafety.co.uk/haswa.htm 8 http://news.hse.gov.uk/2009/01/19/health-and-safety-offences-act-2008-chief-executive-welcomes-tougher-penalties/ 9 http://news.bbc.co.uk/1/hi/england/london/8127237.stm 10 http://www.tobaccoagechange.co.uk/ ?? ?? ?? ?? Ali Al-Abdali Blue 1B -1C ...read more.