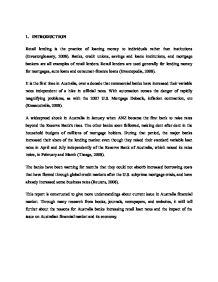 1. INTRODUCTION Retail lending is the practice of loaning money to individuals rather than institutions (Investorglossary, 2008). Banks, credit unions, savings and loans institutions, and mortgage bankers are all examples of retail lenders. Retail lenders are used generally for lending money for mortgages, auto loans and consumer-finance loans (Investopedia, 2008). It is the first time in Australia, over a decade that commercial banks have increased their variable rates independent of a hike in official rates. With automation comes the danger of rapidly magnifying problems, as with the 2007 U.S. Mortgage Debacle, inflation contraction, etc (Rmaaustralia, 2008). A widespread shock in Australia in January when ANZ became the first bank to raise rates beyond the Reserve Bank's rises. The other banks soon followed, making dent after dent in the household budgets of millions of mortgage holders. During that period, the major banks increased their share of the lending market even though they raised their standard variable loan rates in April and July independently of the Reserve Bank of Australia, which raised its rates twice, in February and March (Theage, 2008). The banks have been warning for months that they could not absorb increased borrowing costs that have flowed through global credit markets after the U.S. subprime mortgage crisis, and have already increased some business rates (Reuters, 2008). This report is constructed to give more understandings about current issue in Australia financial market. Through many research from books, journals, newspapers, and websites, it will tell further about the reasons for Australia banks increasing retail loan rates and the impact of the issue on Australian financial market and its economy. 2. RESERVE BANK AUSRALIA (RBA) MONETARY POLICY AND CASH RATE The Reserve Bank of Australia (RBA) as Australia's central bank was established by the Reserve Bank Act of 1959 when it took over the central banking responsibilities from the Commonwealth Bank. RBA is responsible for formulating and implementing monetary policy. ...read more.

Geoffrey Garrett, chief executive of the US studies centre at the University of Sydney, says the subprime disaster has undermined the US's confidence in its own enterprising spirit - just as the dotcom collapse did eight years ago. "The big difference between subprime and dotcom is that subprime wasn't only Wall Street, it's also Main Street. It has hit America in its heartland," he says. McKeon believes the world economic order is fundamentally changing. Developing countries are more economically powerful and the once-mighty US is headed for a likely recession. "In most of my time it has been the US first, daylight second," McKeon says. "We are seeing a very awkward period of adjustment as the US identifies for itself where it now belongs, and there's lots of fallout." And what could that mean for Australia? Garrett believes the post-subprime and post-Iraq US will be more insular and more protectionist. It will be less willing to take the lead on global issues � perhaps spelling bad news for Rudd's gamble that the US will follow Australia (and Europe) in an aggressive market-based solution to climate change. Will things get better? Of course they will, McKeon says. He's just not sure when. "I have no doubt that we are simply in another downturn that will be followed by a period where there's much more confidence," he says. Some believe the market meltdown has been a good thing, in some ways. "The message has got to be that we are actually back to the market environment where volatility and risk are behaving the way they should be," says Nick Kalikajaros, the head of Credit Suisse Private Banking in Australia. "The volatility we are seeing in the equity markets, even allowing for the impact of the global credit crisis, should not be viewed as unusual. We seem to have a short memory. In the last 15 years, I'm not sure people actually respected the risks they were taking for the returns being achieved in their investment portfolios, because they didn't see the downside." ...read more.