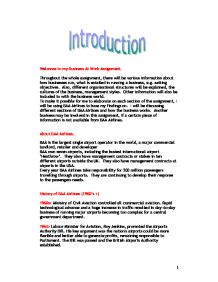 BAA is the largest single airport operator in the world, a major commercial landlord, retailer and developer.

Welcome to my Business At Work Assignment. Throughout the whole assignment, there will be various information about how businesses run, what is entailed in running a business, e.g. setting objectives. Also, different organisational structures will be explained, the cultures of the business, management styles. Other information will also be included to with the business world. To make it possible for me to elaborate on each section of the assignment, I will be using BAA Airlines to base my findings on. I will be discussing different sections of BAA Airlines and how the business works. Another business may be involved in this assignment, if a certain piece of information is not available from BAA Airlines. About BAA Airlines. BAA is the largest single airport operator in the world, a major commercial landlord, retailer and developer BAA own seven airports, including the busiest international airport 'Heathrow'. They also have management contracts or stakes in ten different airports outside the UK. They also have management contracts at airports in the USA. Every year BAA Airlines take responsibility for 200 million passengers travelling through airports. They are continuing to develop their response to the passengers needs. History of BAA Airlines (1960's +) 1960s> Ministry of Civil Aviation controlled all commercial aviation. Rapid technological advance and a huge increase in traffic resulted in day-to-day business of running major airports becoming too complex for a central government department. 1965> Labour Minister for Aviation, Roy Jenkins, promoted the Airports Authority Bill. His key argument was the nation's airports could be more flexible and better able to generate profits, remaining responsible to Parliament. The Bill was passed and the British Airports Authority established. April 1966> British Airports Authority assumed ownership and responsibility for Heathrow, Gatwick, Stansted and Prestwick airports in Scotland. 1971> Acquired Edinburgh Airport from the Government. 1975> Acquired Aberdeen Airport from the CAA and Glasgow from Glasgow Corporation. 1986> Airports Act was passed; calling for dissolution of the authority and the transfer of its property, rights and liabilities to a new company, BAA plc. ...read more.

to less than 1% of total aircraft movements (ATM's) by March 2005. 4. Waste objectives > Producer responsibility for waste minimisation in line with the Government's vision for sustainable waste management through: > A reduction in overall waste generated per passenger by airport operators and managed through BAA contracts by March 2005 on the base established at April 2000. > A 60% reduction in waste sent to landfill through BAA contracts by March 2010 by increasing recycling, composting and waste to energy. 5. Transport objective> the development of airport strategies and company travel plans in line with government policy on sustainable transport, including the establishment of local improvement targets by each airport. All of BAA Airlines objectives are supported by SMART Specific Measurable Achievable Realistic Time bound Annual Targets are audited and verified elsewhere. From comparing BAA's objectives with the different types of business objectives, I can now say that BAA focus on maximising objectives. They seem to concentrate on the issues of the environment and their local community (all of the objectives show this). Looking after the environment seems to be their main concern, as well as their customers. BAA would have chosen these particular objectives, as being one of the world's top airlines, they need to show to an extent concern for the environment as they could be causing damage to the environment with the aeroplanes fumes. BAA would have rejected other objectives such as, 'Satisficing Objectives' because objectives such as those would be to easy for them to meet, this may cause them to lack motivation as they wouldn't need to do much to reach the objectives. However, using maximising objectives motivates BAA at a great level, which they need to meet the objectives set in order to be successful. Objectives can be 'quantitive' or qualitative'. BAA's objectives are qualitative. This is because they are more concerned of providing a good service to the public, rather than setting objectives to make a profit and gain a larger share of the market. ...read more.

Where as, for BAA they are multi cultural. This is because they will have multi cultural people working for the company such as stewards or pilots. Balance sheet Below is an example of a balance sheet, which is from BAA Airlines. The balance sheet shows how much a business is making, and shows the changes of sales (flights) over so many years, in this case, they show you the end results over two years. Communication within BAA Airlines BAA Airlines are a very large company, and they are all over the world. Therefore, each place where there are BAA staff, there needs to be some form of communication between all sections of the BAA company. As they are so large they need some sort of efficient communication technology. BAA use various ways of communicating with every one else. BAA mainly use e-mails to contact each other, which is very efficient and is free to use. Whereas, they still use the post to contact certain sections of BAA, the pot isn't nearly as efficient as e-mails. Recently, BAA have started to use global phone conferencing to communicate with each other. The only problem with phone conferencing is that it is costly. For example, for one line to another country it can cost 22 pence per minute, it doesn't seem much, but if the conference was to go on for a couple of hours, then it will cost a lot. Another problem could be that when you phone BT to book the phone conference, you have to say how long you need the line for, so you only have a limited amount of time. With in one BAA branch, to communicate within one place they use a local intranet and internal phone lines. These are both reliable unless there is a system breakdown. I would say that BAA do have a good communication system. It seems to be efficient and there are no problems with any of their forms of communication. As they have more than one form of communication, if one type fails they have always got another form of communication to use. ...read more.