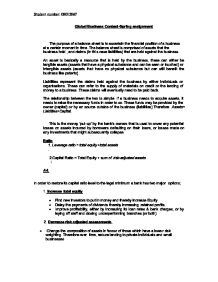 Balance sheets and banks assets. Likely effects of the recession on business.

Global Business Context-Spring assignment The purpose of a balance sheet is to ascertain the financial position of a business at a certain moment in time .The balance sheet is comprised of assets that the business hold , and claims (in this case liabilities) that are held against the business. An asset is basically a resource that is held by the business, these can either be tangible assets (assets that have a physical substance and can be seen or touched) or intangible assets (assets that have no physical substance but can still benefit the business like patents). Liabilities represent the claims held against the business by either individuals or organisations. These can refer to the supply of materials on credit or the lending of money to a business .These claims will eventually need to be paid back. The relationship between the two is simple. If a business needs to acquire assets, it needs to raise the necessary funds in order to so. These funds may be provided by the owner (capital) or by an source outside of the business (liabilities).Therefore Assets= Liabilites+Capital. This is the money 'put-up' by the bank's owners that is used to cover any potential losses on assets incurred by borrowers defaulting on their loans, or losses made on any investments that might subsequently collapse. ...read more.

The toll on US titans is worse: Bear Stearns gone; Lehman Brothers, gone; Merrill Lynch swallowed by Bank of America; Citigroup bailed out. Even the survivors, Goldman Sachs and Morgan Stanley, were forced to take government money." With the public and the economy still reeling from the last credit crisis, unemployment levels are still high and people are finding it increasingly hard to find jobs. This is causing a fall in demand across for the country for goods and services which in turn is meaning supply needs to fall resulting in more job cuts and in some areas the main employer (often for non-skilled labour) closing down. This vicious circle means the public have to tighten their belts and many are defaulting on mortgage payments. More and more households are falling into negative equity and are being forced to take up a higher standard variable rate on their mortgage. This isn't a great scenario to be faced with especially when more and more are becoming unemployed, in this case people are going to struggle to pay off debts, loans, credit cards, and overdrafts which in turn will mean bank assets are going to take a very big hit which could spark a second credit crisis. ...read more.

The problem with this is that these companies were being bled dry not once but twice and in some cases even three or four times not leaving much of a company to be saved. However this is all one persons opinion in this book and we will need to look at several other resources to argue that there is a chance we could experience another credit crisis. Another factor that some experts say could lead to another credit crisis is the fact that the economy is slowing at an alarming rate, far faster than expected. Financial authorities fear that this could cause an even bigger downturn as this is going to create a lot more bankruptcy. This means banks are going to have to yet again raise more capital this year in a marketplace that is scarce of potential investors ultimately culminating in a lack of credit as banks will continue to experience greater losses. To combat this best thing that can be done is to encourage banks to start lending again and that the government may need to enforce capital raising in the early months of 2010 in order to increase credit availability. ...read more.