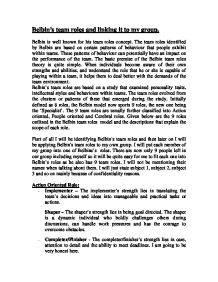 Belbin's theory and linking it to my group

Belbin's team roles and linking it to my group. Belbin is well known for his team roles concept. The team roles identified by Belbin are based on certain patterns of behaviour that people exhibit within teams. These patterns of behaviour can potentially have an impact on the performance of the team. The basic premise of the Belbin team roles theory is quite simple. When individuals become aware of their own strengths and abilities, and understand the role that he or she is capable of playing within a team, it helps them to deal better with the demands of the team environment. Belbin's team roles are based on a study that examined personality traits, intellectual styles and behaviours within teams. The team roles evolved from the clusters or patterns of these that emerged during the study. Initially defined as 8 roles, the Belbin model now sports 9 roles, the new one being the 'Specialist'. The 9 team roles are usually further classified into Action oriented, People oriented and Cerebral roles. Given below are the 9 roles outlined in the Belbin team roles model and the descriptions that explain the scope of each role. Fisrt of all I will be identifying Belbin's team roles and then later on I will be applying Belbin's team roles to my own group. ...read more.

but when it came to making them happen, the practical bit, not a lot of them were willing to do it which was a bit annoying. � Teamworker - I would place subject 8 in this category, she has shown great listening skills in the group and is also very easy going. In my opinion she was the best listener in our whole group as she listened to nearly every word which was discussed in the meeting. She was easy going because we could all ask her if we had missed anything and she was more than happy to tell us. How far she was hardworking or practically good can not be said. However, she was defiantly a good listener and a very easy going member of our team. � Resource Investigator - I believe that subject 3 was a bit like this because they were extrovert and could communicate well in a team but they felt like giving up sometimes after seeing all the laziness and de-motivation coming from some of the other members of the team. Although at couple of times they tried to raise their point and be more extrovert but they were interrupted couple of times and were told not to share ideas which was a bit annoying to see and this de-motivated subject 3 a bit during this project. ...read more.

They were creative in a way but in my opinion every one can give ideas but how many people actually do what they say is what matters and counts which a lot of the members did not do in our group and left it either to me or others to do it. However, one good thing about Belbin's theory is that he identifies several qualities and puts the member in each special role. For instance, I was a good "Specialists" and a good "Completer/Finisher" but not a very good team worker. This means that I am meeting all the deadlines on time and can manage with practical tasks but I am not a very good listener and these roles help me see this clearly. This also helps me understand the role that I am capable of playing within a team. It helps me deal better with the demands of the team environment. Another problem with our group was that, we all choose to work in a team and we did not have choice either ,simply because we were studying the same course so there was nothing we could do. Some of the members were very unmotivated and we had to cope with them, we could not choose people with special skills to work in our team. Where as if it was in real business, we could actually choose people with special skills and qualities and who could promote their expertise in the team. ...read more.