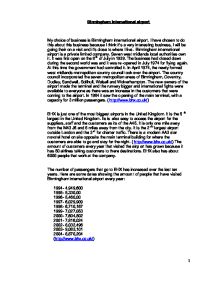 Birmingham international airport is a private limited company. Seven west midlands local authorities own it. It was first open on the 8th of July in 1939.

Birmingham international airport My choice of business is Birmingham international airport. I have chosen to do this about this business because I think it's a very interesting business, I will be going their on a visit and it's close to where I live. Birmingham international airport is a private limited company. Seven west midlands local authorities own it. It was first open on the 8th of July in 1939. The business had closed down during the second world was and it was re-opened in July 1974 for flying again. At this time the government had controlled it. In April 1974, the newly formed west midlands metropolitan country council took over the airport. The country council incorporated the seven metropolitan areas of Birmingham, Coventry, Dudley, Sandwell, Solihull, Walsall and Wolverhampton. The new owners of the airport made the terminal and the runway bigger and international fights were available to everyone as there was an increase in the customers that were coming to the airport. In 1984 it saw the opening of the main terminal, with a capacity for 3 million passengers. (http://www.bhx.co.uk/) BHX is just one of the most biggest airports in the United Kingdom. It is the 5th largest in the United Kingdom. Its is also easy to access the airport for the suppliers, staff and the customers as its of the A45. It is only one mile away from the M43 J6 and 8 miles away from the city. ...read more.

BHX will try to keep the supplier happy by trying to offer good amounts of cash for the resources that they provide. Suppliers are important because without then BHX will not have anything to give to the customers and customer's will go somewhere else and the BHX would fail. Suppliers are external stakeholders as they are not members of the business. Community These are people who live close to the airport. They might not like BHX as it makes a lot of noise, they wouldn't feel safe and it knocks down the prices of the houses. The business should keep the community happy. BHX tries to do this making sure that the noise doesn't got above a certain level and if it does they fine company that go over the level of noise and if the noise goes to high then on their website there is a form that you can fill in to complain about the noise with details about the noise (http://www.bhx.co.uk/). It's not just the house owners that will be affected; also the local business would be affected because of pass and trade inside the airport. The success of BHX could affect the success of their business for example more people might be going to BHX to buy things or to use their service instead of going to their business. The community is external stakeholder as its not part of the business but they could also be internal stakeholder if there are staff working there from the local community. ...read more.

Everyone in a business has to work together whether they like each other or not in order for the business to become successful and make a profit. If the airport were to close down for one day then the business would lose a lot of money. There will be many customers unhappy. Also there will not be any flights coming in as normal, which will affect any other planes that were planning to land at BHX. Even if the most important person isn't there it is very important that the business is stays open or else they will lose their customers and they will lose a lot of money. For example if one of the companies that are using BHX to departure and arrive don't fly because their suppliers haven't come and delivered the fuel then not as many customers would want to use that company again. This will affect BHX because not as many customers that want to use BHX because some of the company that are in BHX are not well organised. Also if the customers have already paid to fly and don't receive refunds they will become even more angry and will not use that company or BHX again. Is this was to happen then the government will take action by giving them a fine. This will also give Birmingham international airport a bad reputation, which is bad for the business. This is why BHX has to be careful with which company they allow to use their land. ?? ?? ?? ?? 1 ...read more.