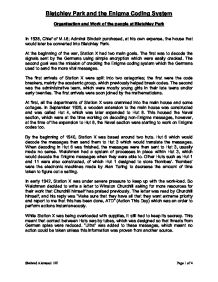 Bletchley Park and the Enigma Coding System Organisation and Work of the people at Bletchley Park In 1938, Chief of M.I.6; Admiral Sinclair purchased, at his own expense, the house that would later be converted into Bletchley Park. At the beginning of the war, Station X had two main goals. The first was to decode the signals sent by the Germans using simple encryption which were easily cracked. The second goal was the mission of cracking the Enigma coding system which the Germans used to send the more vital messages. The first arrivals of Station X were split into two categories; the first were the code breakers, mainly the academic group, which previously helped break codes. The second was the administrative team, which were mostly young girls in their late teens and/or early twenties. The first arrivals were soon joined by the mathematicians. At first, all the departments of Station X were crammed into the main house and some cottages. In September 1939, a wooden extension to the main house was constructed and was called Hut 4, which was later expanded to Hut 8. This housed the Naval section, which were at the time working on decoding non-Enigma messages, however, at the time of the expansion to Hut 8, the Naval section were starting to work on Enigma codes too. ...read more.

He returned to Bletchley Park and attacked the cipher used by the German Army, nicknamed "Green". He succeeded. Part of the Enigma was broke which gave the Station X workforce a huge morale boost. At this point, secrecy became top priority since if the Germans found out that Enigma was broken and then all of Station X's achievements would have been vain. A second breakthrough came in February 1940, where John Herivel, a young mathematician, found another way of solving the settings. John Herivel would imagine the German operator and what he would do each morning when he started work. He imagined the operator realising that the first thing he has to do is to change the setting of the Enigma machine. However, Station X believed that the Germans thought that Enigma was unbreakable, so Herivel assumed that German operators would not be too careful when they send their first message which is to send the setting to other operators. Herivel's method was greeted with great eagerness; however they could not test his method because there were too few messages sent by the Germans in March and February 1940. In Conclusion, I think the most important reason why Station X was able to break the Enigma code was because of the breakthroughs of Alan Turing and John Herivel, without those it would have taken them longer to crack it and therefore meant heavy losses. ...read more.

As well as more than 100 U-boats were being sunk, the use of aircraft carriers and better convoy protections allows the allies to exploit the broken Shark coding system. After the Atlantic was conquered, the remaining U-boats fled to the Mediterranean and protected their own supplies. By December 1941, the condition in North Africa had altered. Station X was providing information about the German force. Station X was now engaged in cracking the Chaffinch coding system used by the Germans within the Mediterranean region. A victory at El Alamien was what secured North Africa for the Allies. Out of all the operations in Europe, none of them need more accurate information than D-Day. In May 1944, Station X discovered that the Germans were expecting a landing in Normandy, but expected that this would be a diversion to the main attack in Calais. Station X managed to find this out and the Allies then manage to adapt their plans. D-Day was originally planned for 4 June 1944 but was delayed due to bad weather conditions until 6 June. Station X was an invaluable source of information about the enemy forces for the last four years of the war. The Allied Commanders still had to achieve the victory, but they used the information that Station X submitted to aid them in their planning. Without the help of Station X, victory would not have been achieved as quickly as it did or may not have been achieved at all. Shahrad Alerasoul 10T Page 1 of 4 ...read more.