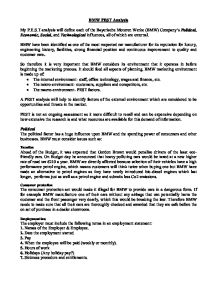 My P.E.S.T analysis will define each of the Bayerische Motoren Werke (BMW) Company's Political, Economic, Social, and Technological influences, all of which are external. BMW have been identified as one of the most respected car manufacturer for its reputation for luxury, engineering history, facilities, strong financial position and continuous improvement to quality and customer care. So therefore it is very important that BMW considers its environment that it operates in before beginning the marketing process. It should feed all aspects of planning. BMW marketing environment is made up of: * The internal environment- staff, office technology, wages and finance, etc. * The micro-environment- customers, suppliers and competitors, etc. * The macro-environment- PEST factors. A PEST analysis will help to identify factors of the external environment which are considered to be opportunities and threats in the market. PEST is not an ongoing assessment as it more difficult to recall and can be expensive depending on how extensive the research is and what resources are available for this demand of information. Political The political factor has a huge influence upon BMW and the spending power of consumers and other businesses. BMW must consider issues such as: Taxation Ahead of the Budget, it was expected that Gordon Brown would penalize drivers of the least eco-friendly cars. ...read more.

Economic growth Economy is expected to grow by 2.75 to 3.75 percent in 2007 and by 2.5 to 3 per cent in 2008 and 9; this will mean more people with disposable income will be purchasing BMWs due to its range of vehicles distributed showrooms across the UK and its image to luxury. Policy towards (minimum wage and unemployment benefits) Unemployment is when a worker is unable to work. The unemployment rate is the number of unemployed workers divided by the total civilian labor force. If there are more people out of work then employed, buying patterns of customers will drop and BMW will suffer as customers will be unable to afford a BMW. The minimum wage is aimed at providing employees with decent minimum standards and fairness in the workplace. It applies to nearly all workers and sets hourly rates below which pay must not be allowed to fall. It helps BMW by ensuring their competitors will be able to compete on the basis of quality of the goods and services they provide and not on low prices based generally on low rates of pay. There are different minimum wage rates for different groups of workers as follows: * The main rate for workers aged 22 and over increased on 1 October 2007 to �5.52 an hour from �5.35 an hour * The development rate ...read more.

To match their job life style people intend to use sports and luxury vehicles to emphasize how well they are doing. BMW have many vehicles that can primarily make others head turn which this could be a likely asset to the customer. Technological Technology is vital for competitive advantage, and is a major driver of globalization. So therefore BMW must look extensively at their products' performance against the likes of Mercedes and Lexus as well as to keep up with the technological trends such as new materials and developments in manufacturing. BMW must consider the following: Government spending on research The government is trying to reduce the digital divide by providing free wireless internet to those who are out of reach of cable and wire broadband. This is partly due to broadband providers have an internet bandwidth that restricts the amount of users using their network. As the maturity of technology is developing and the use of technology (Internet) is increasing, this means that BMW can promote their vehicles even further as they can attract a wide range of internet users and become even more popular within the nation. More people will realize about BMW's efforts to sell luxury, quality cars, which some cannot afford a BMW but they may leave recommendations to others. This can lead to increase in reputation and an increase of sales. ?? ?? ?? ?? BMW PEST Analysis ...read more.