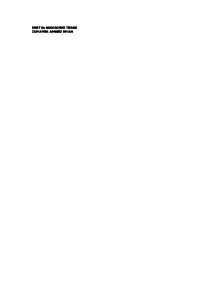 UNIT 19: MANAGING TEAMS ZUHAYRA AHMED KHAN P1 A group is a number of different people. A group is not always a team. For example, a group of people in a shopping centre, this is not a team, as each person has their own purpose for being there. E.g. tourists, shoppers, shoplifters etc However a team is a collection of people with a shared purpose and a commitment of working jointly. For example, fire officer working at a fire, if one person fails, everyone fails, thus it is crucial to develop an understanding of the processes involved in effective teamwork and the input that individuals can make to generating high performance teams. Some other examples of teams are: * Football team * Music Band * The Police * Astronauts * Waiters * Builders Different types of teams need to posses different types of qualities and skills depending on their responsibilities. For example a team of paramedics need time management, critical analysis and interpersonal skills but for a factory distribution line motivational skills and co-ordination skills are needed. In this part of the unit I am going to discuss different types of teams and their associated benefits. ...read more.

This holds many advantages for a company as the individual can be transferred between different departments however in a permanent team it is less likely for an individual to be part of other teams. A permanent team is one that works together continuously. The work is frequently ongoing, for example, a group of business lecturers may work together in a business team for years however they may also be part of other project teams. Permanent teams can change, for example a business may cease to exist. Changes in an industry could mean there is no need for a team anymore for example manufacturing techniques change abd there may be no need for that team. People leave and must be replaced. The need for members in a team may raise or lessen for example in a restaurant if it becomes more popular it may require more waiters. A temporary team is setup for a relatively short period of time to complete a task. It is assembled when a team plan is agreed and then split up when the project 9s completed. For example a charity team may come together to organise a charity event. The project team might include, event organisers, money collectors etc. ...read more.

In general good team work can be seen to generate an increase in productivity and effectiveness. Teams will allow an organisation to achieve key goals. For instance by being able to organise a team, give it the skills it wants and needs for its specific purpose. Teams may create synergy. Synergy is where the sum of the parts added together will produce more than the sum of the parts if separate. What that means is, if you have several individuals, they will produce more e.g. units, or deal with more customers as a team, than they would individually. For example four individuals left on there own could make 8 units in an hour altogether, but together as a team they might make 12 units altogether. Synergy is sometimes described as 2 + 2 = 5 Accountability will mean taking responsibility, e.g. responsibility to achieve a team goal. It is argued that in creating a team (if it is done properly) will help us to identify what the human resource contribution is. That is how much work the employee should do, and what they are responsible for. It is also argued that as the importance of the human resource function grows, so the importance of the accountability will grow REF: BTEC NATIONAL 2nd EDITION BUSINESS BOOK 1 ...read more.