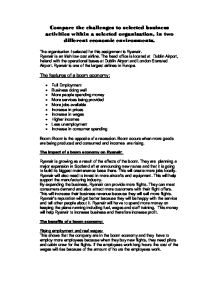 Boom and Bust and Ryanair. Compare the challenges to selected business activities within a selected organisation, in two different economic environments.

Compare the challenges to selected business activities within a selected organisation, in two different economic environments. The organisation I selected for this assignment is Ryanair. Ryanair is an Irish low cost airline. The head office is located at Dublin Airport, Ireland with the operational bases at Dublin Airport and London Stansted Airport. Ryanair is one of the largest airlines in Europe. The features of a boom economy: * Full Employment * Business doing well * More people spending money * More services being provided * More jobs available * Increase in prices * Increase in wages * Higher incomes * Less unemployment * Increase in consumer spending Boom: Boom is the opposite of a recession. Boom occurs when more goods are being produced and consumed and incomes are rising. The impact of a boom economy on Ryanair: Ryanair is growing as a result of the effects of the boom. They are planning a major expansion in Scotland after announcing new routes and that it is going to build its biggest maintenance base there. This will create more jobs locally. Ryanair will also need to invest in more aircrafts and equipment. ...read more.

The impact of the boom is to recover from the things that didn't work from the previous recession and investments they have made will be more efficient. This will enable the company to make changes within the operation of the business. Rising productivity: The impact of the company being in boom is that the flights they provide being improved and new employees will be employed. This shows that more goods are being produced so this means that its productivity is rising. The impacts of the boom on the company include being able to expand the company, investing across the countries and employing more people. The number of employees increased because of the fact that the business is doing well and needs for new recruitment for new flights to be made; this will increase wages. The features of an economy in recession: * Lower incomes * Higher unemployment rates * Decrease in consumer spending Recession: Recession occurs when people involved in business become more cautious and customers cut back on spending, and start to save more; manufacturers and sellers cut back on their orders, produce fewer goods and start to cut back costs in general, including by laying off workers. ...read more.

The impact of the recession was added to by the ash cloud. Due to the ash cloud, thousands of passengers were stuck at airports and Ryanair had a duty to provide them with food and shelter. They have to pay back the money for the people who booked tickets for flights that passengers could not get on. Ryanair was accused of failing to take travellers and repay expenses almost four months after the volcanic ash led to cancelled flights. Positive: Ryanair have taken on extra staff to deal with complaints due to the volcanic ash incident. This will help the local economy because they can provide short term jobs for the local people. Ryanair insists it will continue to expand across Europe. Some companies went bankrupt so this will lead to more opportunities to get new customers. More customer's mean more profits so there's more money to invest. This will help Ryanair to survive the recession. Some airlines will go bankrupt which is good because Ryanair will have less competition on the market. The impact of recession upon Ryanair is that it makes aircraft purchasing cheaper because there will be less demand in the market. The number of Ryanair passengers will increase because there will be less competition for customers. ...read more.