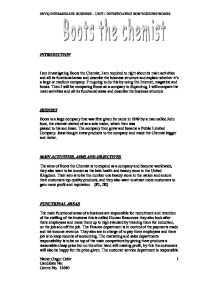 INTRODUCTION I am investigating Boots the Chemist, I am required to right about its main activities and all its functional areas and describe the business structure and explain whether it's a large or medium company. I'm going to do this by using the Internet, magazine and books. Then I will be comparing Boost as a company to Superdrug, I will compare the main activities and all its functional areas and describe the business structure HISTORY Boots is a large company that was first given its name in 1849 by a man called John boot, the chemist started of as a sole trader, which then was [0] passed to his son Jesse. The company then grew and became a Public Limited Company. Jesse bought knew products to the company and made the Chemist bigger and richer. MAIN ACTIVITIES, AIMS AND OBJECTIVES The aims of Boots the Chemist is to expand as a company and become worldwide, they also want to be known as the best health and beauty store in the United Kingdom. Their aim is to be the number one beauty store in the nation and ensure their customers top quality products, and they also want to attract more customers to gain more profit and reputation. ...read more.

1996 This act is to extend the law relating to the young employees and enable the effect to be given to council. 22nd June 1994 on the protection of young employees purposes to repeat the protection of young people's employment. The Sex Discrimination act 1975 This act is all about protecting your rights no matter if you're a male or a female. In sum businesses you won't get a job for being a female in others you won't get one because you're a male, this act insures that everybody is equal and is able to get the jobs that they want. The Race Relations Act 1976 This is the act to make new provision with respect to discrimination on racial grounds and relations between the different raced groups. Act 1975 amendments for bringing provision in that act relating to its administration and enforcement into confirming with the corresponding provisions in this act. The Disability Discrimination Act 1995 This act includes a definition of who the disabled person is for the purpose of the act, only those people who are defined as disabled can benefit from this act. Under the act the government can publish statutory guidance which provides advice on the matters to be taken into account by adjudicating bodies, such as courts when they say whether the person is disabled for the purpose of the act.{P3, M2} SIMILAR BUSINESS (SUPER DRUG) ...read more.

E-mail: you wouldn't know if your information is received. Letters: your letter might get lost in the post. Fax: you wouldn't know if your information is received. {M3, D1} EVALUATION I have had many weaknesses as well as many strengths in completing this assignment. My strengths were that I knew what types of products Boots sold I also knew what sections they have in the store which made it easier for me in completing the assignment. My weakness was that I weren't able to do my research properly, when I found information I didn't save it so when it came to the parts where I needed that information I didn't have it and I had to waste time looking for the information. My understanding of Boots as a business company. Boots sells products for children as well as older people; they have different sections for different aged people of the public. It provides a section for the customers that are interested in their health and beauty products; it also has a pharmacy and an optician so that they can help people with certain illnesses. Boots is a company which is aiming to grow in many other countries {D2} BIBLIOGRAHPY http://www.bized.ac.uk/compfact/boots/boots5.htm http://www.bized.ac.uk/compfact/boots/boots7.htm http://www.superdrug.com/superdrugtoday.php ?? ?? ?? ?? GNVQ INTERMEDIATE BUSINESS - UNIT 1 INVESTIGATING HOW BUSINESS WORKS 1 Name: Ozgur Cebir Candidate No: Centre No. 12640 ...read more.