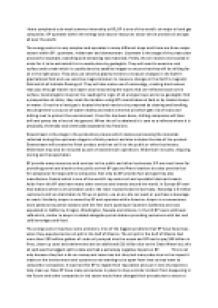 BP operates within the energy and natural resources sector which provide oil and gas all over the world.

Transfer-Encoding: chunked ﻿I have completed a six week summer internship at BP; BP is one of the world's six major oil and gas companies. BP operates within the energy and natural resources sector which provide oil and gas all over the world. The energy sector is very complex and operates in many different steps and there are three major sectors within BP, upstream, midstream and downstream. Upstream is the stage of the production process for example, searching and extracting raw materials. Firstly, the oil needs to be located in order for it to be extracted this is usually done by geologists. They will need to examine rock surface and terrain which is usually done by satellite images to ensure that they will be drilling for oil in the right place. They also use sensitive gravity meters to measure changes in the Earth's gravitational field and use sensitive magnetometers to measure changes in the Earth's magnetic field which all indicate flowing oil. ...read more.

Aside from this BP also have many other services and brands around the world. In Europe BP own Aral stations which is a fuel station and is the most trusted brand in Germany. Everyday 2.5 million customers visit an Aral station to fill up on petrol, use an on-site car wash or purchase a beverage or snack. Similarly, ampm is owned by BP and operates within America. Ampm is a convenience store added onto petrol stations with the first store opening in Southern California and now expanded to California, Oregon, Washington, Nevada and Arizona. In the UK BP owns wild bean café which, similar to ampm is added alongside petrol stations providing customers with hot and cold beverages and food. The energy sector may face some problems. One of the biggest problems that BP have faced was when they experienced an oil spill in the Gulf of Mexico. The oil spill in the Gulf of Mexico had more than 200 million gallons of crude oil pumped into the ocean and BP had to pay $40 billion in fines, ...read more.

Shell has a major downstream business in the UK, supplying fuel and lubricants to businesses and motorists, and the aviation and shipping industries. Texaco is an American oil retail brand. Its leading product is its fuel. Texaco was an independent company until its refining operations merged into Chevron Corporation in 2001, at which time most of its station franchises were divested to the Shell Oil Company. Exxon Mobil is the world's leading publicly-owned energy company. ExxonMobil's business in the UK is conducted through individual operating companies for instance, Esso. BP may face problems with their competitors as other fuel companies may have cheaper deals which would make customers go to them and BP will lose sales. In the future oil and gas will eventually run out which means that it would be hard for the energy sector to carry on operating as they won?t have any products to sell. However, a lot of energy companies are venturing into renewable energy. In the future, energy companies can still operate if they provide renewable energy instead of oil and gas. BP have started to venture into renewable energy which means they could still be successful in the future. ...read more.